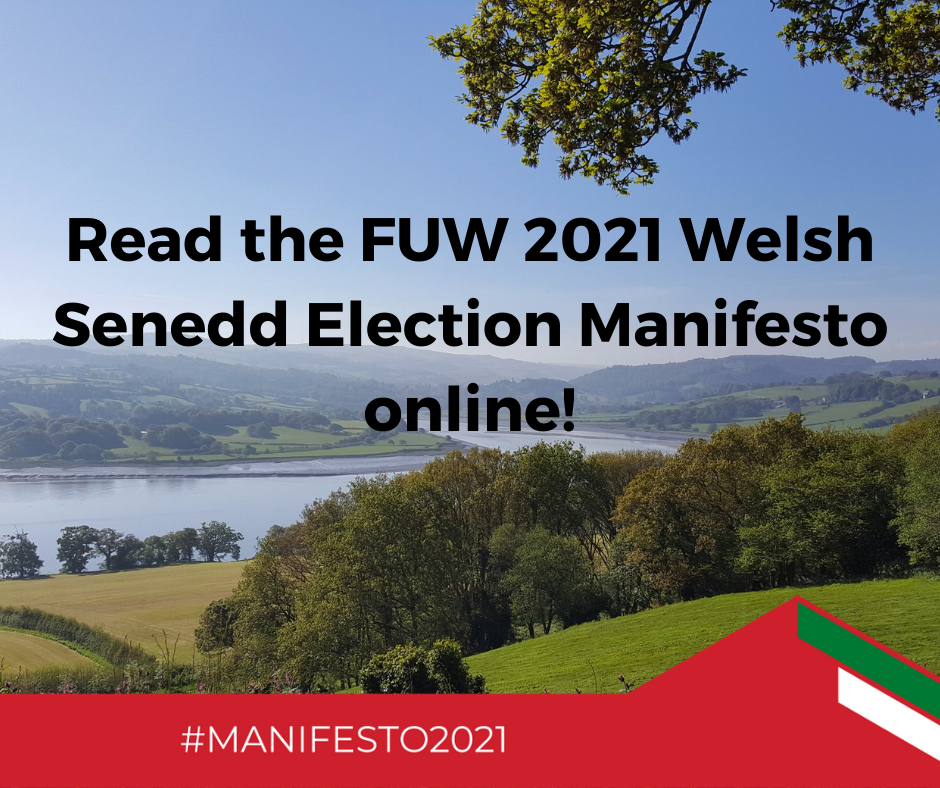 Five years ago, ahead of the 2016 Welsh Senedd elections, the Farmers’ Union of Wales warned of the unprecedented challenges facing the incoming Senedd Members and Government. Since then those challenges have not only materialised but been exacerbated and added to.

Outlining the big issues facing agriculture in Wales at a press conference, which launched the FUW’s 2021 Welsh Senedd Election Manifesto, FUW President Glyn Roberts said: “The materialisation of a far harder form of Brexit than had been promised by those who lobbied for our departure from the EU has restricted access to our main export markets on the continent in ways which are only beginning to be felt.

“At the same time, the on-going Covid-19 pandemic has changed our lives beyond recognition and has highlighted the fragility of global food supply chains and the importance of a strong farming sector on which our domestic markets should be able to rely for commodity products.

“While such issues have been largely beyond the control of our devolved administrations, the reaction of the Welsh Government to the uncertainty and challenges faced by our agriculture sector has at times been bewildering and counterintuitive, not least in terms of its appetite for drastically increasing costs and restrictions while advocating untried and untested reforms of rural support policies.”

Meanwhile, UK Government cuts to Welsh rural funding - in direct contradiction to promises made repeatedly by those who advocated Brexit - have added to the pressures on Welsh agriculture, the rural economy and Welsh Government, said the Union President.

Through its manifesto and on-going lobbying work, the FUW continues to be clear that Wales’ family farms lie at the centre of our rural economy, culture and landscape, supporting hundreds of thousands of jobs and tens of thousands of businesses involved in the Welsh food supply industry, and making innumerable other contributions to the well-being of Welsh and UK residents - benefits central to which is the production of food, our most precious commodity alongside water.

“Moving forward we need policies which reflect the need to mitigate climate change and protect our environment but such aspirations must be tempered by the knowledge that sweeping changes that undermine our family farms and food production will merely shift production to countries with lower animal welfare standards and higher global and environmental footprints,” said Glyn Roberts.

Highlighting the disappointment of members over the years with the current Welsh Government, Mr Roberts added that rather than feeling that industry concerns have been taken on board and seeing proportionate measures put in place to safeguard the agricultural  industry, many consider the current direction of travel as a betrayal of devolution which directly threatens the agriculture industry and the culture, language and way of life which are intrinsically linked to Welsh food production.

Speaking from his farm in North Wales, he added: “With this in mind, I make no apology in highlighting our members frustration about the lack of bespoke Welsh policies regarding future farming scheme proposals and tackling water quality issues put forward by the current Welsh Government, and the distinct feeling that those who govern us from Cardiff Bay are now more remote from and indifferent to our rural communities than ever.

“Welsh farmers are proud to produce world-leading food to environmental, animal health and welfare and food safety standards that are second to none, but these need to be regulated in a proportionate manner which does not stifle innovation, create unjustified restrictions and place Welsh farmers at a severe competitive disadvantage against other countries’ agricultural produce.”

Such concerns are particularly pertinent in an era when the UK Government is proactively seeking to sign trade deals with countries with production standards which fall well short of those already required of Welsh food producers, and while the aspiration that further raising standards will provide our producers with a competitive advantage in high-end markets is understandable, it is also naive given what the data tells us about widespread consumer indifference to such standards both here and around the globe.

“Alongside other critical issues and priorities outlined in this manifesto, the FUW urges the incoming Welsh Government and Senedd to develop bespoke, tailor-made policies that reflect such global realities as well as Welsh economic, social and environmental needs and the seven Welsh Well-being Goals; policies which maintain our already high standards while ensuring Welsh producers are not undermined in ways which lead to greater imports of food from those with far lower standards than our own,” said the Union President.

For the period of the next Welsh Senedd and beyond, the FUW is committed to lobbying all those in Cardiff to ensure that agriculture and family farms receive the attention and respect that they warrant – for the sake of all our futures.

A copy of the FUW’s 2021 Welsh Senedd Election Manifesto is available at:  https://www.fuw.org.uk/en/policy/policy-reports