Butchers and farm shops - community champions during the pandemic 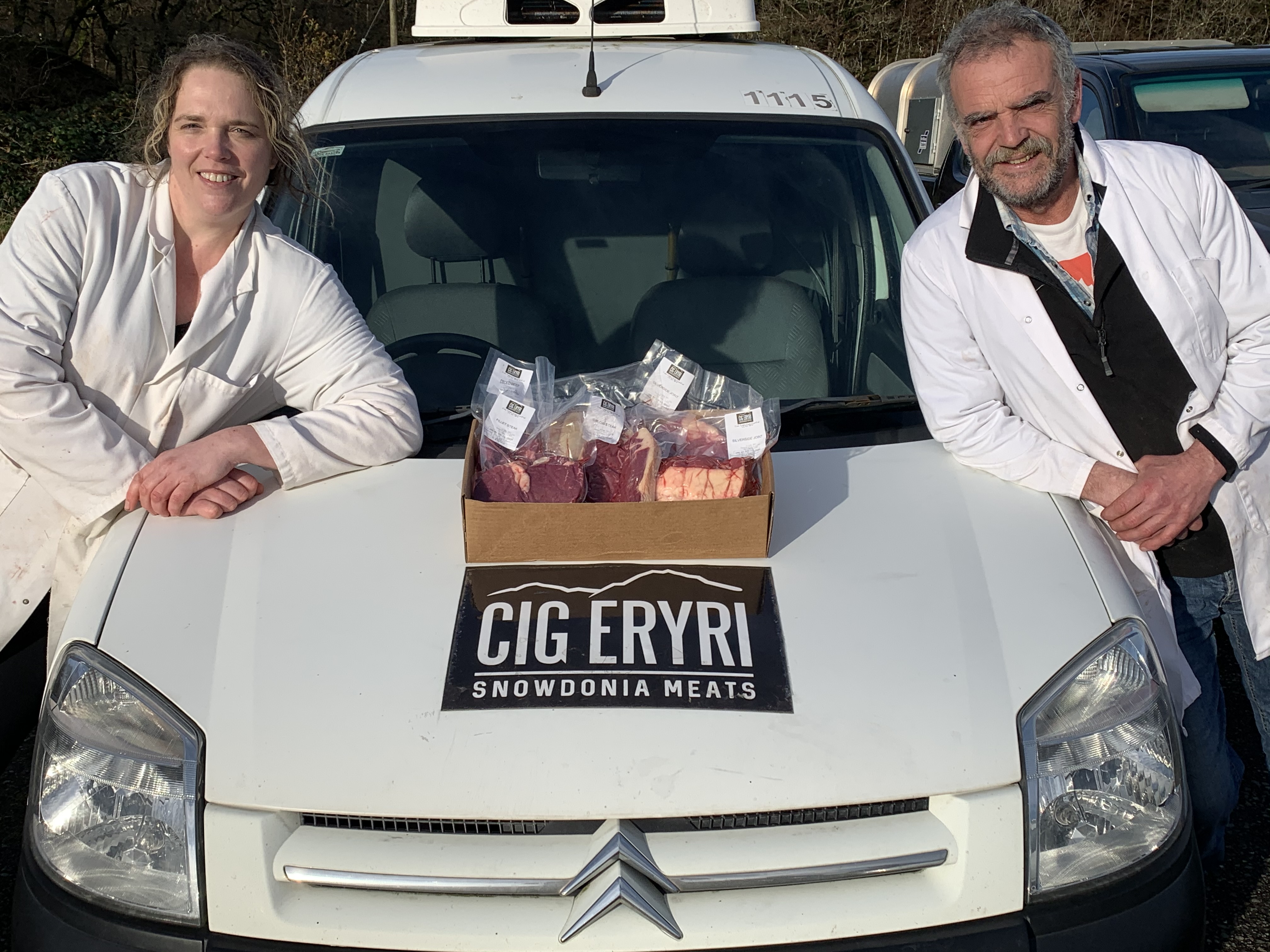 High streets closed down and the shop front shutters came down across the country. Lockdown forced those who could to work from home, children couldn’t go to school, hotels, restaurants and pubs had empty tables, the lights were off. An air of quiet drifted across towns and villages. But if you looked closely, there was a group of people for whom life was about to get busy.

Dotted around the Welsh countryside, farmers carried on with their day-to-day jobs of looking after the environment, rearing livestock and producing food, small local farm shops and butchers were called upon to provide the essentials. And they answered that call with resolve, determination and grit. Their communities were not going to go hungry.

One of those countryside champions is Dafydd Wyn Jones, of Gerlan farm, who farms in partnerships with his wife Morfudd, daughter Anna and her husband Gerallt. The farm, which has been run by the family for over 40 years, is situated outside of the village of Rhos Isaf in the foothills of Y Fron. Here they raise their animals in an organic environment in and around the farm and grazing land of Uwchgwyfrai common. Dafydd also runs SiopFfermGerlan and Cafe near Groeslon, which includes a butcher shop where you can buy the local produce including poultry, Game and seasonal Vegetables.

When the first big lockdown struck, the family had to close the cafe and then again in November, but the farm shop and butcher continued to serve the community supplying pork, beef and lamb from Gerlan farm, which is taken for slaughter at Conwy Valley.

Speaking about his lockdown experience, Dafydd said: “When the actual Covid started our business went up massively, people felt safe buying from us.  We’re outside, we have a covered yard and they felt safer than going to the supermarket especially with social distancing.”

As well as keeping the shop and butcher open, he also delivered to customers homes in a 10 mile radius. He recalls: “Customers phoned up with their order for sausages, beef, lamb and then we’d call back when we had done the order, tell them how much it was and ask them to leave a box and the money outside. We’d drop it off and call them from the van to let them know the order has been delivered. So we didn’t have any actual contact with the customer.

“I feel the community is getting closer together because of this and you find out who the true people are. Whatever happens we stick together. Everybody helps each other. If a customer called and said I don’t have bread or milk and butter - we’d get that for them as well.”

The importance of local food supply chains could not have been clearer during the year, and Dafydd recalls a time when local food was higher on the agenda. He says: “ 25 years ago there were 6 or 7 butchers in Caernarfon, now there is only 1. When the supermarkets came the small butchers died off. The butchers that have survived have done well. But we might be turning a corner. People are definitely more concerned about where their meat comes from now.

“We’ve looked after our customers over this pandemic now, I’m just worried that when things go back to normal that people will forget it. People say they will continue to shop locally but if they actually do in the future remains to be seen.”

With Christmas knocking on the door, he is now preparing for the next busy season and the orders are coming but is concerned that a lockdown over Christmas could be bad news for the business.

“We have started preparing for Christmas now and it is looking good. The orders are coming in. My only concern is, as I have to put the order in now for the turkeys - what will I do if there is another lockdown? Will people be able to get their turkeys? Let’s hope so!

“Hopefully we never have to go through anything like this again, it has been a real learning curve. But I’ve seen people come together which I never thought would happen before.  The community is still there. People are going to have to change their ways and they have done it to a degree. Because this is not going to go away quickly,” he added. 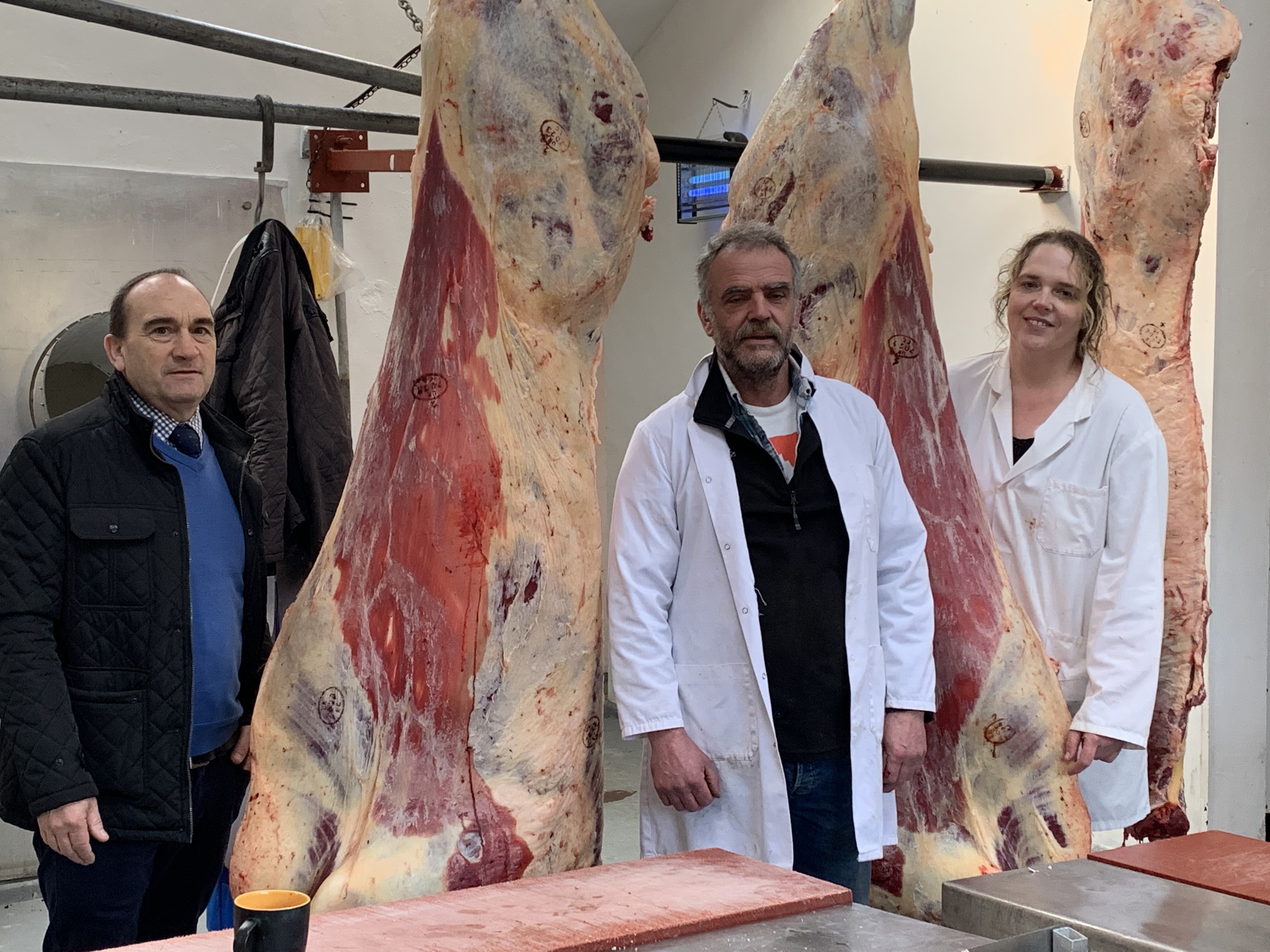 Travel south and another group has risen to the challenge of keeping their local community supplied with fresh, local produce. The partnership at Cae Iago Ffestiniog – Cig Eryri, run by Dewi Williams and his wife Megan, and Tesni Davies and her husband Dafydd, process beef, lamb and goat meat direct to farmers, so that they, in turn, are able to develop selling their own produce. The partnership has also started selling some meat through the local garage at Trawsfynydd.

Cwmni Cig Eryri started as a new venture in April 2019 to develop a small abattoir at Cae Iago, Llan Ffestiniog (near Blaenau Ffestiniog) and thanks to the support the group have had from farmers in Meirionnydd and beyond, were able to expand the business.

Tesni Davies and Dewi Williams of Cig Eryri said that they have seen a tremendous increase in throughput in the abattoir this year, especially the ‘home kills’ which enables livestock producers locally to sell their own meat, which filled a gap in the market.

Tesni said: “We very much hope that, with Covid 19, more local produce will be chosen. Of course, we hoped for an increase in business anyway, because of so much support locally. The crux of the issue here is whether customers will continue their habit of buying locally after Covid – and only time will tell. The truth is that, with pressure on household incomes, no doubt some will be tempted to go to the discount retailers.”

For now the partners in the business remain positive, embracing their role in serving the local community. Dewi added: “We wish to thank everyone for the fantastic support we have had over the last year and a half. Merry Christmas and Happy New Year from us all at Cwmni Cig Eryri!”