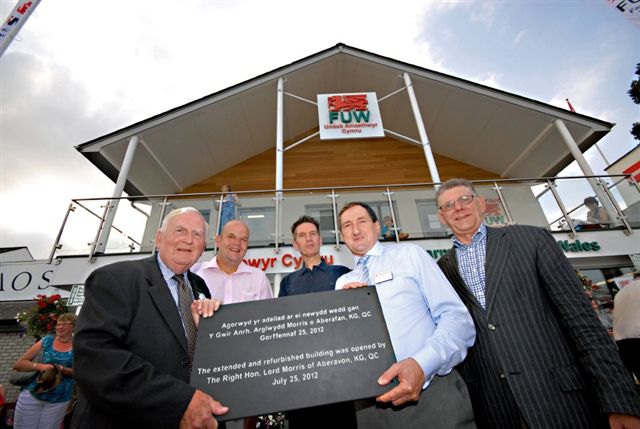 by The Rt Hon Lord Morris of Aberavon, KG, QC

It is a privilege to congratulate the FUW to celebrate its 65th anniversary. There can’t be many of us around who were present almost at its creation.

I am not going to fall into the temptation of old men to dwell on the past. The incredible difficulties of setting up the FUW were set out in my book, “Fifty years in Politics and the Law.”

I have added a little to them in my recent book in Welsh, “Cardi yn y Cabinet”. (Y Lolfa, Talybont) in which there is an excellent photograph taken during the visit of my wife and I to the FUW office in Dolgellau a few years ago. It was a poignant visit to the town where the Union’s hopes of making headway in North Wales were nearly crushed. However, my instructions were to pick myself up and go further north. Fortunately, having just left the Army and taking part in military manoeuvres on the plains of Germany, I had been taught if you face an insurmountable obstacle, you find a way round it.

I try to visit each year your pavilion at the Royal Welsh Show, which I had the privilege of opening. I am fortunate in a well-informed House of Lords so far as agriculture is concerned, to do what I can to speak up for Welsh agriculture and to fight for the repatriation of powers from Brussels to Cardiff rather than Westminster.

On the second reading of the Agriculture Bill I welcomed the Trade & Agricultural Commission and commended the appointment of your President to it.

It is many years ago that the Minister of Agriculture and myself, as the Secretary of State for Wales, gave me long fought-for recognition for the FUW. I took care that the decision was taken by the Westminster Agriculture Minister and myself jointly just a few weeks before I took over governmental responsibility for Welsh agriculture. I emphasised it was the decision of a labour government and not a personal whim by myself.

I will never forget that particular St. David’s day, I believe in 1977, when I assumed responsibility for Welsh agriculture. It was celebrated at the N.A.A.S. Welsh Centre at Trawscoed. In actual fact, it had to be put back a few hours so that I could attend the funeral of the doyen of Welsh stock producers, my great-uncle, J. M. Jenkins of Carreg Caranau, Talybont.

I keep in touch with the developments of Welsh agriculture through my brother, Dr. Dai Morris, the first principal of the Welsh Agricultural College and a breeder of Welsh sheep. I am also able to cross-examine one of my sons-in-law, who supervises the family farm in Suffolk with my daughter, Non, and he tells me of the problems of arable farming; rather different to the dairy farm that I was brought up on. Sadly, like many Welsh farmers he has gone out of dairy.

The problems that actively concern me at present are the future trade deals with other countries and ensuring that the high standards of British food production are not sacrificed.  This is a constant battle.

As I am writing I am fortunate to sit on a House of Lords Committee whose task is to examine a whole series of international treaties the UK Government is negotiating. It is a good vantage point to try to safeguard British agriculture.

For a body that was envisaged to last three months, your membership can take pride in its 65 years’ service to Welsh agriculture. I promised to serve as your Deputy General Secretary and Legal Adviser for the first three months, which became two years, until I returned to my profession and my hopes of entering the House of Commons.

With these few words - again, my congratulations!