∙ The 2019 Conservative Manifesto stated “...we will guarantee the current annual [Common  Agricultural Policy (CAP)] budget to farmers in every year of the next Parliament”

∙ The EU CAP budget for Wales for the period 2014-2020, confirmed on 8th November 2013 by the then Secretary  of State for Environment Owen Paterson was “…a pillar 1 (direct payment) allocation of around €2,245  million, and pillar 2 allocation of around €355 million”  (https://www.gov.uk/government/news/uk-cap-allocations-announced )

∙ Under the EU’s ‘N+3’ rule, the Welsh Government is entitled to spend money from the 2014-2020  Rural Development Programme budget in the three years after the end of the budgetary period to  which the money ‘belongs’

∙ 15% of the £286 million Pillar 1 budget is transferred annually to Pillar 2 under the ‘Pillar transfer’ mechanism, reducing the annual amount paid to farmers through Direct (Pillar 1) Payments to £243, and increasing the average annual EU funding for Pillar 2 (Rural Development) to around £90 million

∙ On 30th December 2019, the UK Government announced £243 million would be made available for  Welsh Direct payments in 2020

∙ While the UK Government announced £243 million in funding for the 2020 Basic (farm) Payment on  30th December 2019, they made no reference to the circa £42 million usually transferred annually to  the Pillar 2 (Rural Development) budget

∙ As such, there is an additional £42 million ‘missing’ from the £242 million 2021-2022 financial year  allocation announced by the UK Government on 25th November 2020 – bringing the total reduction in  Wales’ 2021-2022 allocation to around £137 million less than had been anticipated, based on  successive promises and the 2019 Conservative Manifesto

∙ The UK Government has pointed out in correspondence to the Welsh Government and FUW that the  total EU CAP budget for the period 2021-2027 is €344 billion - €39 billion (10%) less than the €383 billion allocated for the 2014-2020 budgetary period, arguing that this would equate to a £34 million  reduction in Wales’ annual allocation if the UK was still a member of the EU

∙ One of the reasons that the EU CAP budget has been reduced is because the UK has left the EU and  will therefore no longer contribute substantially to the EU budget - so the overall EU 2021-2027  budget is lower than would otherwise have been the case. However, the number of countries eligible  to receive funds from the CAP has also been reduced, as the UK is no longer a member, and the UK  previously received around 8% of the EU CAP budget – so the use of the new EU CAP budget in justifications for UK budgets is invalid.

∙ Notwithstanding this, if Wales was still eligible to receive the same percentage of the EU budget as  under the 2014-2020 CAP, Wales’ share of the new €344 billion CAP budget in 2021 would on average  be £298 million per year - £56 million more than was announced by the UK Government on 25th November 2020

∙ While the FUW has labelled Wales’ replacement CAP fund allocation as a ‘Brexit betrayal’, the Welsh  Conservatives have claimed that the Welsh Government has pulled the wool “...over the Farming  Unions [sic] eyes” and believe that unspent funds from the 2014-2020 CAP budget should be included  in the funding calculation

∙ Given that the same funding formula has been applied in Scotland and Northern Ireland, the FUW’s  belief that the 2021-2022 funding allocations are hundreds of millions below what they should be, based on the 2019 Conservative Manifesto commitment, is supported by the Welsh Government, the  Scottish Government, the Northern Ireland Executive, NFU Cymru and NFU Scotland 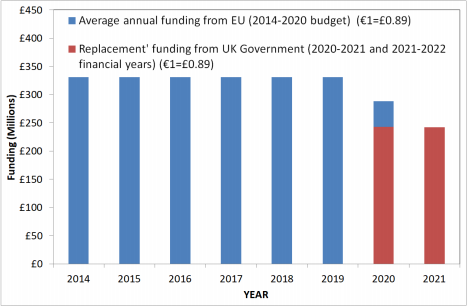