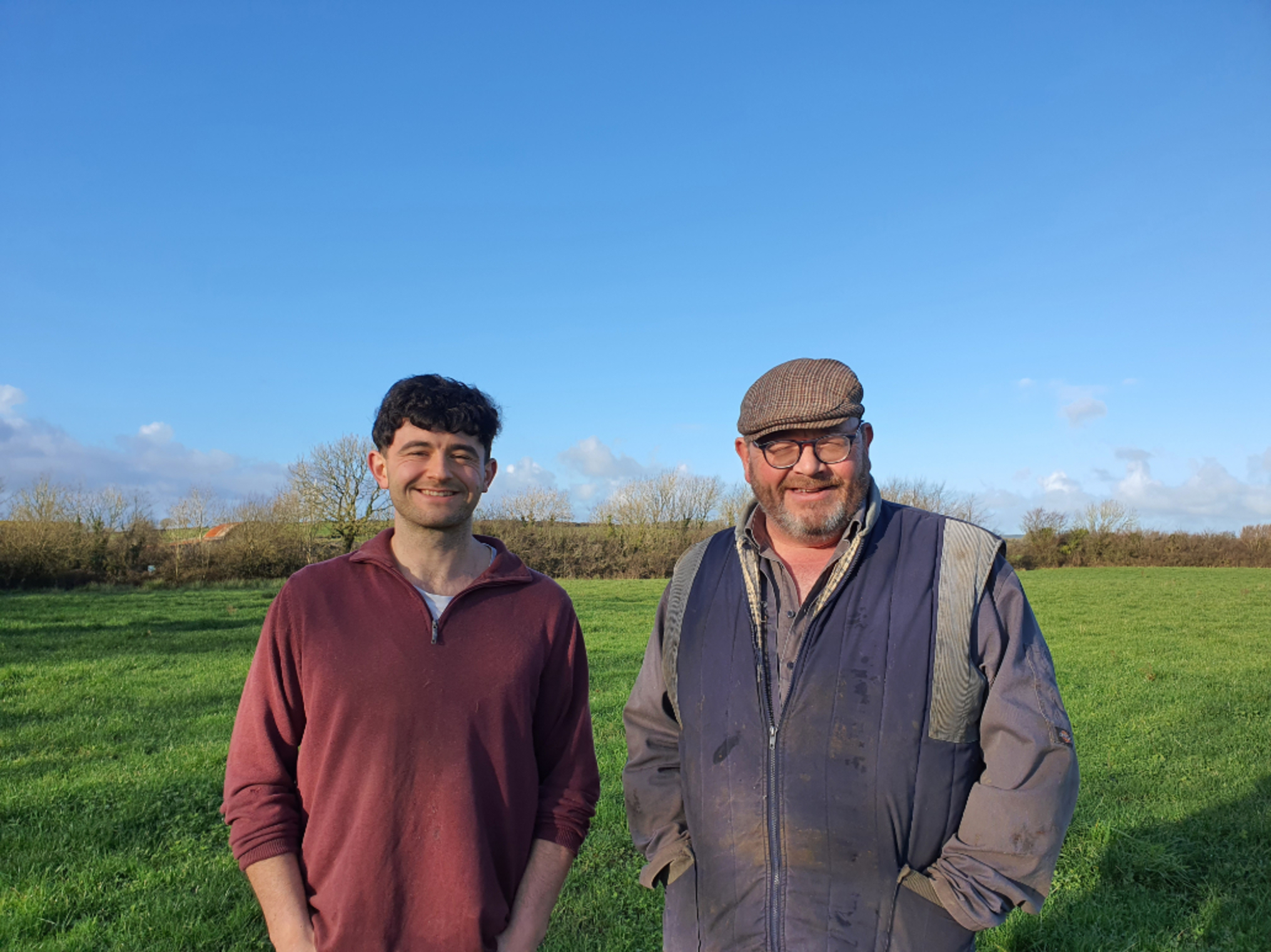 The business was started by Dai and Sharron, who took on the tenancy of Barnsley Farm, a 143 acres farm. At the time it was a stock/arable unit which they converted into an organic dairy unit starting with 33 cows and leased milk quota. In 2001 they took on a further 90 acres of pasture land and then in 2005 the neighbouring farm within the same estate.

In 2018 they purchased the neighbouring farm Beudy Bach, from the estate and installed a modern robotic milking system on the holding and son Llyr has joined the business after returning from Aberystwyth University where he studied agriculture.

Llŷr said: “Mum and dad have always been farming, and I’ve had an interest in farming so went to Aberystwyth Uni to study agriculture and took a year in industry, then came home. It’s what I enjoy doing and it’s what I want to do.”

Across the holdings, the family look after 110 hectares and 35 hectares of summer grazing for the heifers and use for silage. In the milking herd they have 130 cows and 60 followers. “We predominantly keep British Friesian cows and only occasionally buy some in, but we rear our own British Friesians. They're a great, hardy breed of cow, which we graze from February to November, they produce great milk from grass,” said Llŷr.

His day starts much like any other dairy farmer - clear away the silage, wash the robots down, scrape, feed up and then check the computer who’s milked, and who needs milking. “There are always 1 or 2 that haven’t been into the robot. The biggest perk with the robot is that you’re not tied down to a certain time of milking. The cows do it on their own during the day and night. I can go and do a job early morning or late in the afternoon and not have to worry about milking. It gives us an extra 5 hours in the day to do those odd jobs that normally have to wait,” he adds.

As much as looking after the livestock, the family take their responsibility towards the environment seriously and are enrolled in the Glastir advanced scheme. “We fertilise the land by trailing shoe and muck, certain habitats on the farm are fenced off so the cows can’t get in there. We also let the hedges grow a bit more to ensure there is plenty of biodiversity. We also have some solar on the farm, and as we’re organic I would say we’re practising a pretty sustainable form of food production,” said Dai.

When it comes to the land the family utilise a rotation on 65 ha. The grass fields within cow walking distance are used as grazing paddocks for 5-6 years, then get planted with forage rape, and are then moved on to an arable silage crop, before going back to grass the following year. The silage fields grow a white clover mix for 4-5 years, then get an arable cover crop before being used for 2-3 years for growing a red clover mix. The farm also sustains about 15 ha of woodland and 30 ha of permanent pasture.

“We are currently investigating how much carbon is stored here, and are doing an inventory of our natural capital. We’re working with Natural Capital Consortium Ltd and our milk buyer Calon Wen on this and have parcels of land here which we are looking to include in the natural capital project and develop it further next year,” added Dai.

Llŷr, Sharron and Dai feel strongly about their role in looking after the environment. “We are an organic farm, so we don’t use chemicals or synthetic fertilisers on the soil. We like to make sure that we leave the soil in a better condition, so that it’s there for future generations. Maintaining soil structure is key to us, so we try not to take tractors or cattle on fields if the conditions aren’t right,” said Llŷr.

“If you’re using pesticides, you are affecting the food chain. Everything feeds on everything. That’s where an organic farm comes into it’s own. The main thing is soil health, if the soil is healthy, the cattle are healthy and then biodiversity flourishes and the whole food chain is better. Consumers relate to wildlife but soil is not as sexy as birds but it’s critically important. We have to produce food, but we limit our effect on the environment as best as we can,” added Dai.

When it comes to food production, Llŷr, is keen for consumers to understand how their food is produced, and the impact it has on the environment. “Everyone is entitled to eat what they want and farmers in general are not really bothered about what diets people have, if it’s vegan or vegetarian. What bothers us are the false stories, misconceptions and lack of knowledge on food production. Especially here in the UK, where we have high welfare standards and strict regulations.