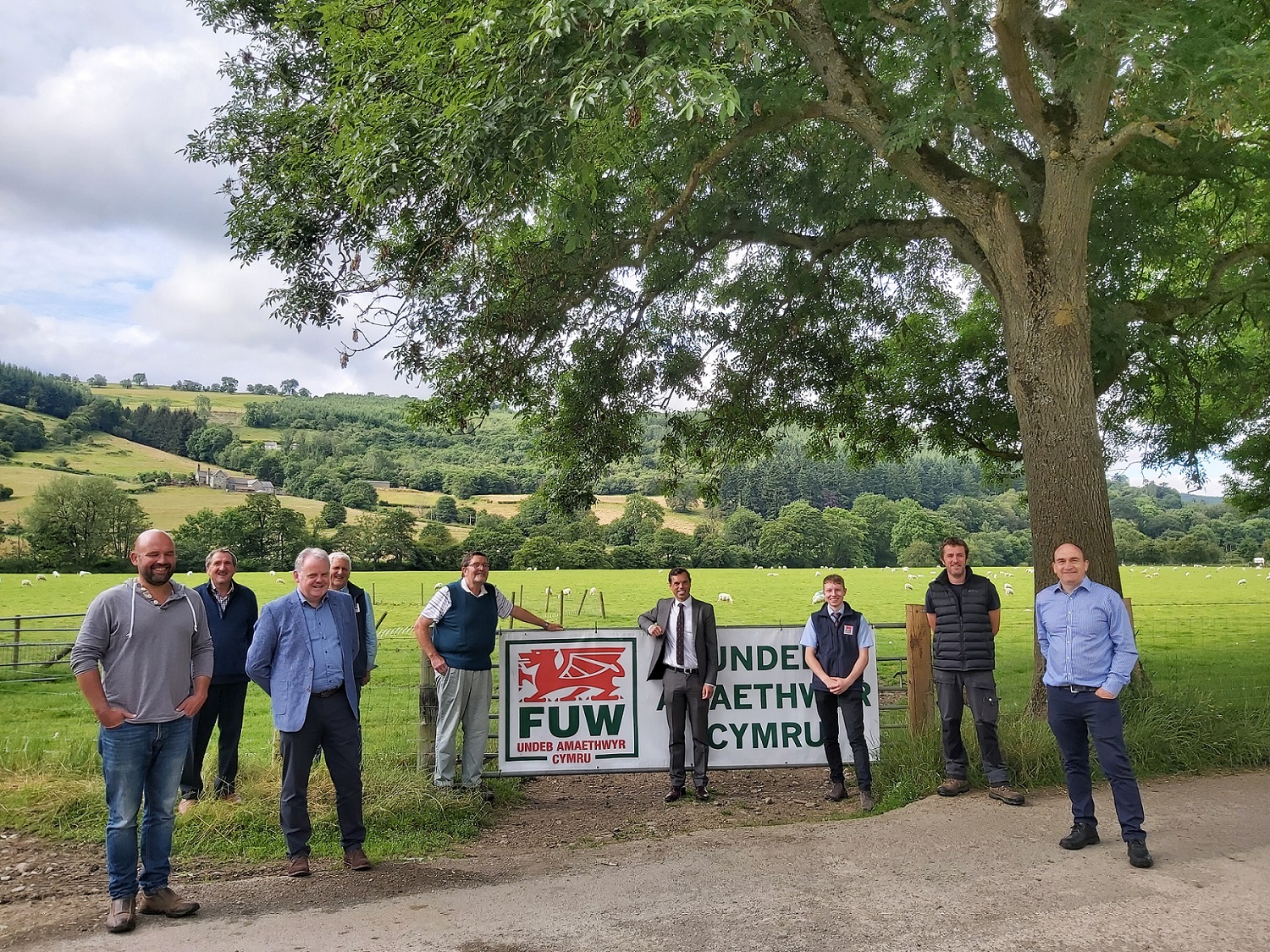 Farmers from Meirionnydd have raised critical concerns of the industry with Member of the Senedd, Ken Skates, at a recent farm visit with Farmers’ Union of Wales Meirionnydd County Chairman Edwin Jones and Union officials.

The event which was hosted by Mr Jones and his wife Eirian, at Ty Mawr, Carrog, Corwen, Denbighshire, provided an opportunity to see the farm, which stretches from the banks of the river Dee to approximately 1500 feet above sea level, and for members to highlight and discuss issues around climate change, future farm policies and the agricultural water pollution regulations.

The typical family farm, which extends to 149 hectares and is mostly hill and upland, is home to 730 Welsh Mountain ewes and 190 shearlings.

Edwin Jones was elected Meirionnydd FUW Branch Chair in June 2021 and is a former Assistant Headmaster at Ysgol Maes Garmon, Yr Wyddgrug. His wife Eirian is also a former Head of Welsh and Drama at the school. Edwin and Eirian have farmed at Tymawr since 2002, with Eirian being brought up at the farm. Both retired from their teaching posts in 2012.

Ty Mawr is an all grass, low density, low output farm, with minimal fertiliser used. Speaking about environmental and climate change concerns, Mr Jones said: “Global averages to debate agricultural emissions are so unfair and misleading when considering this type of farm. We have good quality grassland, and improving soil health is very important to us.

“What is clear to us and the agricultural industry is that on-farm renewable energy sources, conservation and carbon sequestration through land use must be recognised to offset agricultural emissions rather than as separate entities.”

Walking around the farm, Mr Skates further heard that the farm, like many others in his constituency and across Wales, is heavily reliant on the BPS scheme, and that some element of certainty is required on a future scheme to ensure there are thriving, sustainable, family farms in Wales for generations to come.

Edwin Jones added: “We really need to know what the future of farm support is going to look like. This is of utmost importance if we want to ensure there are thriving, sustainable, family farms here in Wales. The Glastir scheme was not suitable for the farm when it was introduced and planting trees is also not really an option for us.

“Any future agricultural support scheme must therefore recognise that payments for public goods are only part of the answer and that a baseline payment will be required to underpin the local communities and economies, as well as sustainable, nutritious food production.” 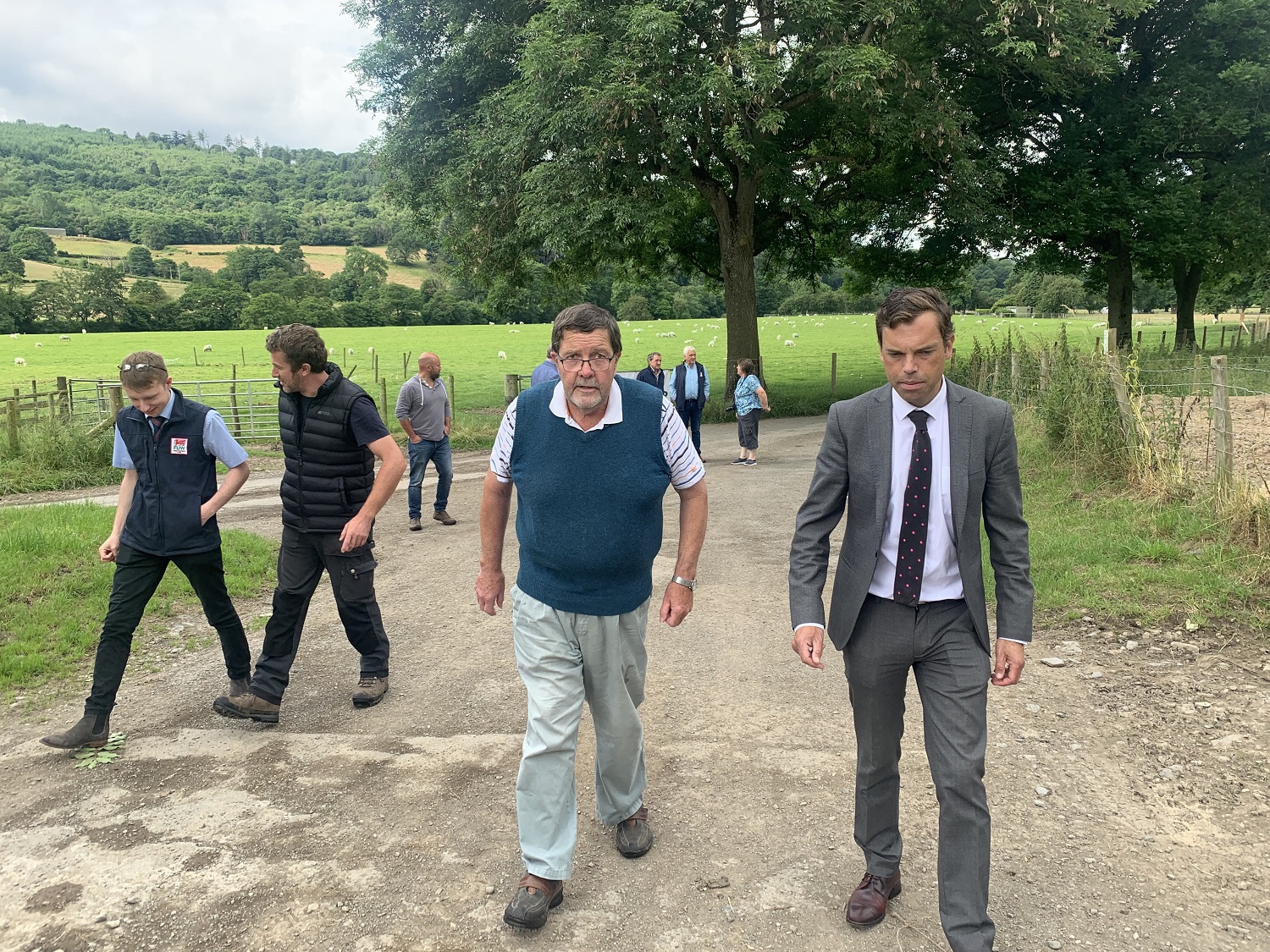 Talking about the wider impacts farm businesses like Ty Mawr have on the rural economy, FUW Policy Officer Teleri Fielden said: “Profits generated by this farm are all spent in the local community. It must be emphasised that each pound received by Welsh farms generates many more pounds for other businesses - mechanics, hauliers, contractors, livestock markets and so on - meaning the economic benefits of farm support stretches far beyond the farmyard and are annually worth billions to Wales’ economy.”

Union officials further stressed that a third of Wales’ population live in rural areas where farming, and businesses which rely on agriculture, play an essential role in local economies.

“When we consider the far reaching impact agriculture has, we are naturally concerned about trade deals, like the one currently being finalised with Australia, which can allow the importation of cheap food produced to standards which fall well short of those required of Welsh farmers,” added FUW Meirionnydd County Executive Officer Huw Jones.

“Put simply, if a Welsh farmer was to employ the land and animal management practices that are commonplace in Australia, they would face prosecution and risk imprisonment. We must not allow this to happen,” added Huw Jones.

Addressing major concerns about the incoming all-Wales NVZ regulations on stocking rates, food production levels and associated capital costs, FUW Policy Communications Officer Gareth Parry said: “The recent motion passed by the Senedd must be seen as a step in the right direction in addressing the concerns the Union has highlighted repeatedly about these regulations, which can only described as using a sledgehammer to crack a nut. The FUW will be engaging with the Committee once it has been created and we hope that we can move forward in a spirit of cooperation with the Welsh Government for the sake of all our futures.”