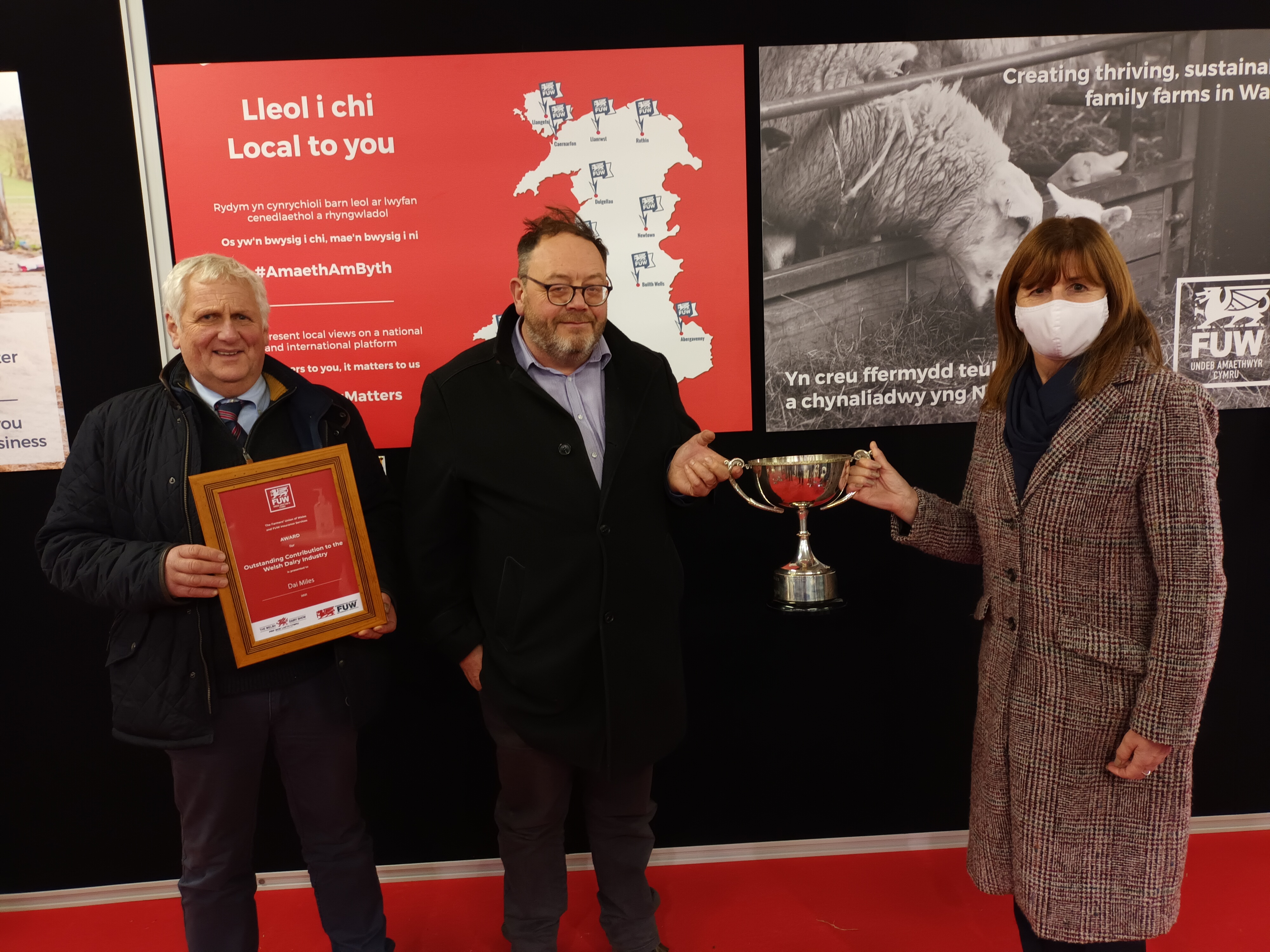 Well known Pembrokeshire dairy farmer, Dai Miles, who farms just outside of Haverfordwest has been selected as the winner of the 2021 Farmers’ Union of Wales (FUW) award for the person who has made an outstanding contribution to the Welsh Dairy industry.

Presenting the award at the Royal Welsh Winter Fair on Monday 29 November, FUW President Glyn Roberts said: “Dai Miles can only be described as a stalwart of our dairy industry. His passion, dedication and enthusiasm for all things dairy is inspiring.

“Not only does he do an outstanding job as a dairy farmer, looking after the livestock, land and producing sustainable nutritious food, he was also instrumental in securing a long-term market for organic milk from Wales by supporting organic processing needs in Wales. The award could not go to a worthier winner.”

Dai Miles grew up in Felin Fach near Lampeter and attended Aberaeron Comprehensive school. Not from a farming family, Dai started his farming career by attending the Welsh Agricultural College in Aberystwyth where he received a National Diploma in Agriculture and completed a sandwich year at Godor Nantgaredig.

After college he spent five years as a herdsman of 160 cows at Waun Fawr, Glynarthen, Llandysul and then a further five years at IGER Trawscoed working as a relief herdsman between the two dairy herds, Lodge Farm and the organic herd at Ty Gwyn before taking the brave step to take a tenancy on his own.

In addition, Dai has participated in Farming Connect’s Agri-Academy Rural Leadership Programme which has helped him to further develop his communication skills to enable him to undertake his roles away from the farm more effectively.

As well as running his own organic dairy farm, in 2000 Dai Miles became one of the four founder directors, and the first Chairman, of Calon Wen Organic Milk Co-operative. The co-operative , which is owned by 25 farming families, helps to secure a long-term market for organic milk from Wales by supporting organic processing needs in Wales.

In 2013 he became Managing Director of the enterprise and set about developing the brand  within the niche organic milk market. The company now supplies its own brand of milk, butter, cheeses and frozen yoghurt to major retailers in Wales and the UK, as well as a wide range of other retail outlets.

Central to Dai’s success is a passionate belief that a profitable agricultural industry is the key to maintaining the countryside and rural culture of Wales for future generations.