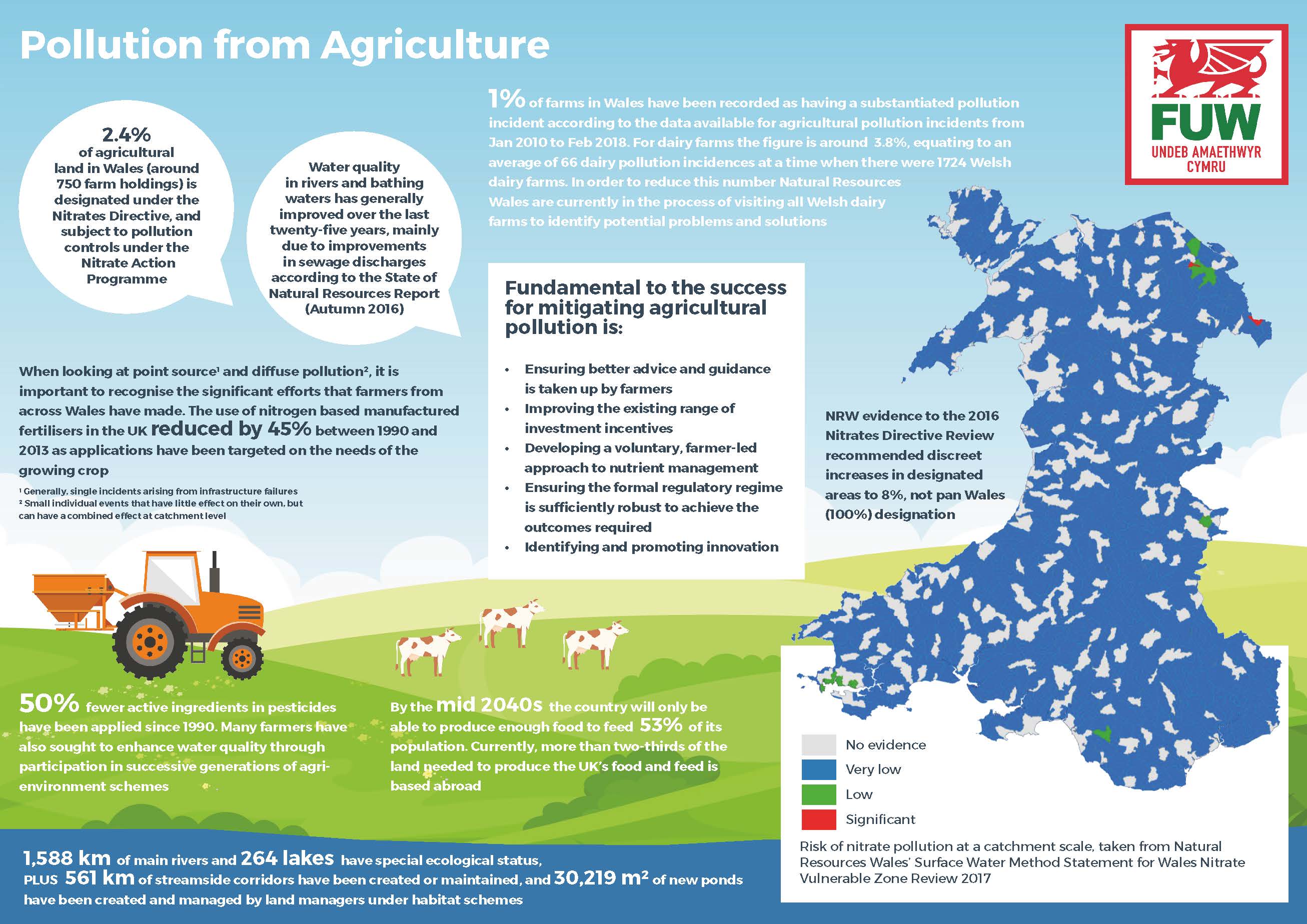 If current Welsh Government proposals go ahead, from January 1 2020 all registered holdings across Wales, regardless of size, will have to comply with new land management regulations aimed at improving water quality. To all intents and purposes, the proposals mirror the regulations which apply in Wales’ Nitrate Vulnerable Zones, which currently cover just 2.3 per cent of Wales’ landmass.

While this alone will fill most FUW members with dread, in reality, the full implications and complexity of what is planned can only be understood by considering the full proposals - proposals that the FUW is committed to fight.

Agricultural pollution is a concern for every farmer: A single pollution incident can cause huge harm to wildlife and the environment, while the steady, periodic or combined leaching of pollutants can lead to damaging concentrations of nitrates or other chemicals, resulting in problems such as algal blooms and the contamination of water supplies.

And of course, pollution brings with it financial costs for farm businesses - whether directly, as a result of fines; or a result of the loss of valuable nutrients from soils and other adverse impacts.

Thankfully, the data available for agricultural pollution incidents from January 2010 to February 2018 shows only 1 per cent of farms in Wales to have been recorded as having a substantiated pollution incident, but some of those that have been attributed to farming were catastrophic, adding to existing pressures from members of the public, charities and other bodies to tighten up farming regulations.

Such pressures, which have been exacerbated by unusually wet periods in recent years, come against a background of legislative pressure due to Nitrate Vulnerable Zone and Water Framework Directive legislation. For these reasons, the FUW has worked with others for decades to help address agricultural pollution in a proportionate and targeted way.

In recent years, a large proportion of this work has been through the FUW’s membership of the Welsh Land Management Forum (WLMF), chaired by Natural Resources Wales, and in particular the WLMF agricultural pollution sub-group, which has met monthly over the past two years.

Following a consultation on the expansion of Wales’ Nitrate Vulnerable Zones and a request from Cabinet Secretary Lesley Griffiths, in April 2018 the group submitted a detailed report and 45 recommendations to the Cabinet Secretary.

While work by the group continued, with a particular emphasis on targeting actions in areas where problems are known to exist, it seems that the work of the Welsh Government ground to a halt in terms of considering the recommendations or the results of a programme of NRW farm visits aimed at identifying problems and appropriate solutions: Lesley Griffiths has neither met with the group nor responded to the recommendations.

Rather, the Welsh Government announced in November 2018 that it intends to bring forward legislation for the whole of Wales which is, to all intents and purposes, a cut-and-paste of the NVZ rules - increasing the number of Welsh farm holdings subject to costly and restrictive legislation from an estimated 600 to more than 24,000.

While there are problems that must be addressed, such a move is wholly disproportionate and would undermine efforts to target pollution in those areas where action is needed, while adding huge costs and burdens in vast areas where no problems exist.

The FUW has raised such concerns in writing to Lesley Griffiths, as well as during numerous meetings with the Welsh Government, emphasising that the Government’s decision makes a mockery of their stated commitment to strike “...the right balance of comprehensive regulatory measures, voluntary measures and investment” and “...explore further options to provide land managers with flexibility, where these would achieve the same or better outcomes than a regulatory approach.”

Amongst the many concerns raised by the FUW is the fact that the proposals would undermine a number of the elements of the Welsh Government’s proposed public goods scheme by raising the regulatory baseline by an extent that is out of all proportion for most Welsh farmers, taking away numerous options for what is termed ‘additionality’.

As such, the FUW requested a copy of the impact assessment - including in terms of costs for the agricultural industry - undertaken to assess what is in effect an extension of the NVZ area from 2.3 per cent of Wales’ land mass to a whole territory approach, and the legal assessment of how the introduction of the regulations across Wales would impact on the goals of the Well Being of Future Generations Act.

In her response, Lesley Griffiths implied that the Welsh Land Management Forum sub-group - which includes representatives from  Dŵr Cymru/Welsh Water and the Carmarthenshire Fishermen’s Federation, as well as other bodies - considers agricultural pollution as a ‘minor issue’. She nevertheless committed to publishing an Integrated Impact Assessment - but only when the relevant Regulations are laid before the Welsh Assembly.

This suggests that the relevant impact assessments are still being worked on, despite a Ministerial decision having apparently already been made, and as with the public goods, this would represent a further departure from the evidence-based decision making which was proclaimed to be a cornerstone of Welsh Government policy making a decade ago.

The FUW takes the need to tackle agricultural pollution extremely seriously, and will continue to fight to ensure this is done in a way which is both proportionate and targeted, and reflects the local and national evidence base.