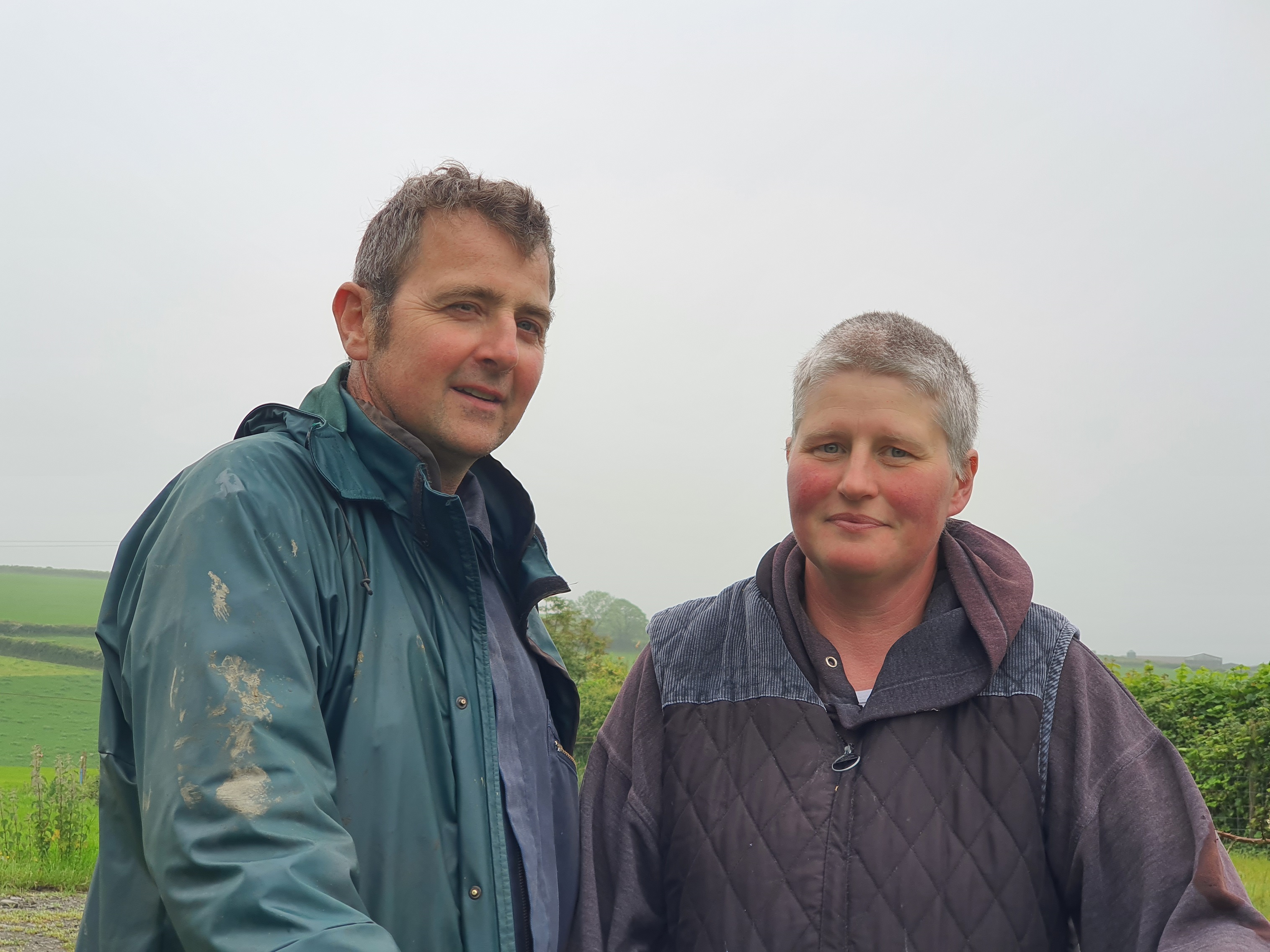 Pembrokeshire husband and wife team Jeff and Sarah Wheeler, who farm at Clyngwyn, Efailwen, Clynderwen, feel the current Control of Agricultural Pollution Regulations are going to make their business unviable and are asking the Welsh Government to take a hard look at what they’re asking the industry to do. The third generation to farm here, the couple milk150 cows on a spring calving system, looking after 195 acres which is down to grass land (of which 35 acres is rented), plus 50 acres of woodland.

Under current NVZ regulations in other UK and EU Nations and previous regulations in Wales, farmers with more than 80% of their holding designated as grassland had the ability to apply for a derogation to increase the annual livestock manure Nitrate whole farm limit from 170kg N per ha to 250kg N per ha.

Despite the same option being included in Welsh Government’s draft Water Resources regulations published in 2020, it was omitted from the regulations before being laid in front of the Senedd in 2021 without any form of warning or explanation.

Jeff says: “We’ve got enough storage for slurry but the stocking rates will hit us badly. They’ve brought in the nitrate limit, which wasn’t in the initial 'draft regulation, it came out of the blue. Any other country with such regulations has a derogation on the nitrate limit. If you're 80% down to grassland, which we are, you can keep more stock in other countries. Why is that not the case here now?”

The decision by Welsh Government to remove the option of applying for a derogation will restrict the ability of Welsh farmers to maintain milk and beef production levels from 1 January 2023, while further eroding the ability of Wales’  farmers  to compete on a level playing field with the rest of the UK - where it is understood that derogation provisions are continuing.

“Welsh Government has not included such a derogation, so we will be forced to reduce the stock down to unsustainable levels. For us that means we’ll only be able to keep about 120 cows and lose a fair bit of our milk income. The 170kg N per ha whole farm limit with increased slurry storage requirements and consequent reduction in stocking rates will make a large proportion of dairy farm businesses financially unviable and will prevent them from optimising the use of slurry as a natural fertiliser,” he added.

The family are also worried about the wider impact on the rural economy. Sarah says: “We have good grass growing land for dairy here. Pembrokeshire is a dairy county. With everyone looking for more land to keep their dairy herds, there will be problems, big ones. People will have to cut back, because they can’t afford the land or can’t get hold of it, so the milk is going to be lost to other countries as well.

“Think of the economic impact and the ripple effect that will have. Loss of revenue, loss of money going to contractors, the wider rural economy is going to feel the impact of this just as much as farmers are.”

Farmers like the Wheeler family are looking to buy or rent additional land in preparation for when the nitrogen limit is imposed on 1 January 2023 to be able to maintain livestock levels by having enough land area available to spread the amount of slurry produced.

“We had a sustainable production grant 4 years ago to build extra slurry storage with the cubicles on top. We submitted a business plan for that to the Welsh Government and that was based on 150 cows. Now they turn around and tell us we can’t keep 150 cows unless we take on more land.

“If we took on more land, either rented or bought, to meet the nitrates limit we would be ok but try getting hold of more land, it’s impossible. We’re surrounded by dairy farms who all have the same problem. There are some big dairy farms around here and competition for land is fierce. Even if you find the land, it’s not going to be cheap,” explains Sarah Wheeler.

The question for the family business is whether or not to reduce the number of cows or find the land. But the price of the land, they fear, would not leave them with a profitable business.

'If you keep the extra cows, all the money would be going on paying for the extra land, which makes no sense.  We would be allowed to spread nearly the same amount of artificial fertiliser as we did before to produce the same amount of grass but our stocking rate has to go down.  If we reduce cow numbers we lose income which jeopardises the economic viability of the business,” said Jeff Wheeler.

Despite the decision of the Senedd to review the current Control of Agricultural Pollution Regulations, Jeff and Sarah are concerned about their livelihood and the future.

“We know that there is going to be a review but we are not hopeful at the moment. Such draconian regulations will in the end achieve the exact opposite of what they set out to achieve. Farmers are being used as a scapegoat for all the problems and I can’t see how anything will positively change for us. I am worried about the future. It’s very stressful.

“We knew there was a change coming, and we’ve prepared for it as best as we can but they said they weren’t going to bring these rules in while the covid pandemic is on-going and they have gone back on their word. What else will they go back on? It’s very difficult for the industry to trust them. I worry what they will throw at us from one day to the next,” says Sarah Wheeler.

Jeff adds: “In a way we’re lucky as we are an established business but where does that leave younger businesses and the next generation? Those who have started in the last 10 years for example and have borrowed huge amounts of money to set up their business and then they are forced to pay for this - it could well be the end for some of those young businesses. It’s going to hit every dairy farm.

“We borrowed the money to build the slurry store and yard coverings 4 years ago with the assistance of the sustainable production grant, which also paid for calving pens, feed areas etc.  The business plan which was agreed by the Welsh Government was based on 150 cows.  Where do we go from here?  We were trying to prepare for the potential of NVZs and we borrowed a lot of money to make this happen but with the reduction in cow numbers how are we going to pay that back?  The business plan, drawn up by a business consultant, was based on a 10 to 15 year repayment period but we won't have the same income from our milk now due to us being forced to reduce the size of the dairy herd.”

Frustrations with the Welsh Government’s approach is clear here, with the family questioning the rationale behind the regulations. Jeff said: “ We have a devolved government so what are they doing copying regulations that are out of date, have been proven to be ineffective and are not specific to Wales. They will not achieve with this regulation what they have set out to, unless they are set to destroy our farming industry and the environment at the same time.”

In preparation for the next phase of the regulations and the required reduction in livestock numbers, the family have started to sell off their dairy herd. Sarah said: “ We have already sold a few cows, the price for them at the moment is fairly good, and we are keeping less heifers from this year and are putting less cows in calf. We will gradually have to let the numbers fall. It’s not what we want to do but there isn’t much other choice.”

“The trouble is we don’t really know what’s going to happen. You can’t just say let’s get rid of these 20-30 cows instantly, because maybe next year things will change. The uncertainty is not workable. At the moment the price for cows is good, but when everyone realises that they have to get rid of their livestock at the same time, the price is not going to be so good. So what do you do? Nobody is going to want the cows in 2 years time.

“I’m the third generation to farm here and have been doing this for over 20 years. The way things are at the moment, I’d sell the farm tomorrow but Sarah wants to keep going. It has gone too far. These regulations are going to be the end of the industry, there is no doubt in my mind,” added Jeff.

Sarah, who grew up on a dairy farm in Canada, says their whole lives are being turned upside down and put in jeopardy. “Farming is my life. I come from a dairy farming background in Canada, I grew up on a farm, my father and grandfather milked and we sold the cows there when I was about 10 years old because the quota system came in in Canada. Then we kept suckler cows and I was a vet for over 15 years. I love farming more than Jeff does I think. It’s just in you. We want to be outside, work with the animals.

“We are trying our best to look after the countryside, look after our animals and produce healthy and safe food for people to eat. Why are they making it so hard? Rules and regulations from all corners, our milk buyer wants us to do one thing, Welsh Government wants us to do another thing, keep fewer cows and everything else.

“All we want to do is do our job. At the end of the day people need to eat and we’re being made to look as if we’re the villains in all of this. Our intentions are good and it’s our way of life. I’d like to know what the farming industry has ever done to the Minister. Why does she feel so much hate for us? Because that’s what it looks like. TB policy isn’t working and it’s horrendous, now the extra regulations on top. It’s one thing after another with this government. There is just no light at the end of the tunnel.”