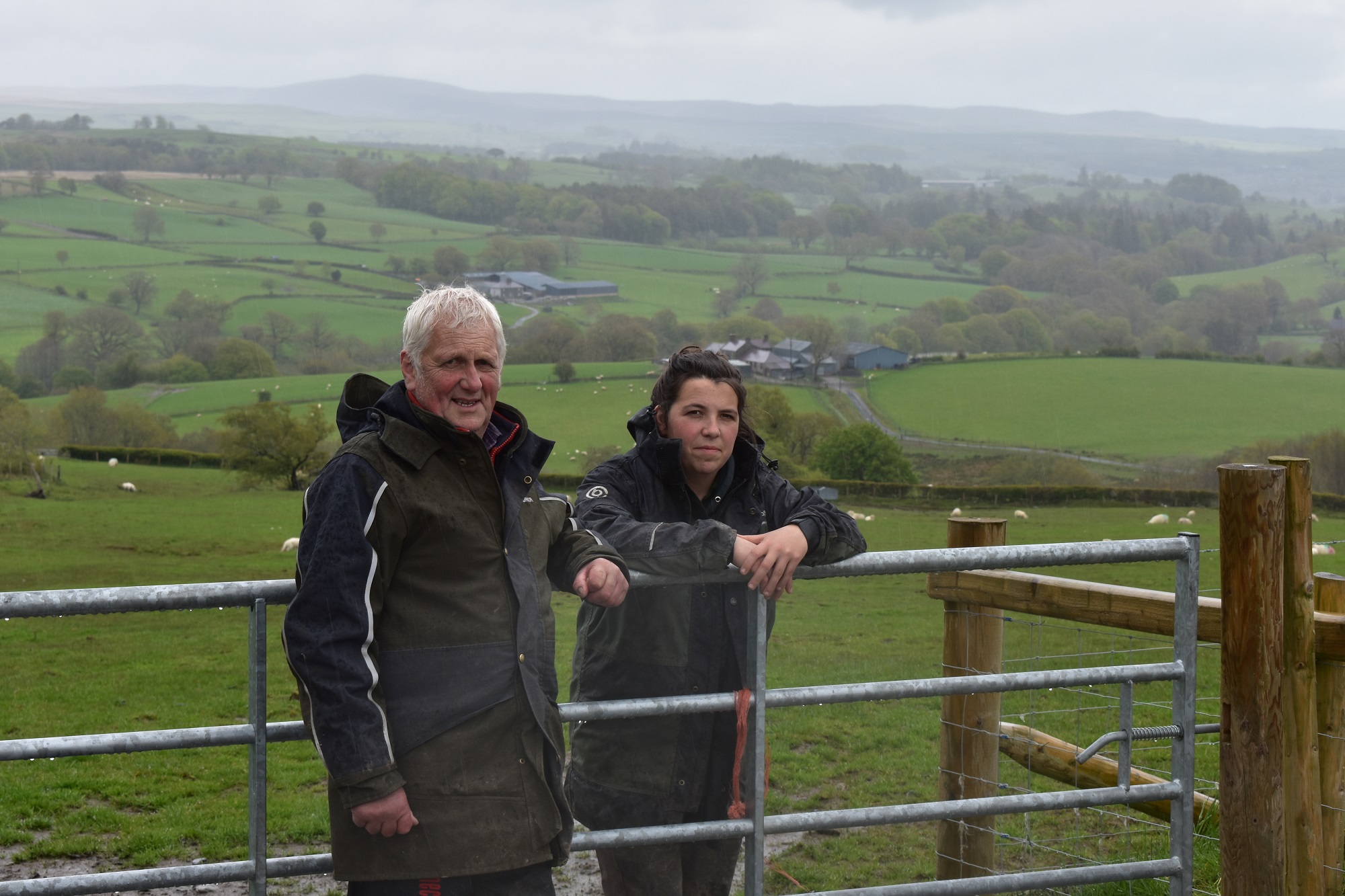 Dylasau Uchaf, a National Trust tenant farm, is home to the Roberts family. Glyn and his daughter Beca keep a watchful eye on the land and livestock here in the Eidda valley, hidden away between the upper Conwy and the Machno. The sheep and beef farm is about 4 miles from Betws y Coed and 3 miles from Ysbyty Ifan.

A lot has changed up here in the last 5 years, says Glyn Roberts, who takes his responsibility of producing food and looking after the land seriously. Working with Bangor University and Hybu Cig Cymru-Meat Promotion Wales (HCC) a carbon audit was carried out on the farm highlighting where the business is doing well and where there is room for improvement when it comes to reducing carbon emissions.

Using the result of the carbon audit the family hopes to be in a better position to highlight areas of improvements and lower their carbon footprint by increasing efficiency, lowering feed cost and increasing growth rate, less days to slaughter, reduced burden of disease, reducing the use of fertilizer by knowing the farm's needs and also using less fuel, are all things that are now being taken into consideration.

Glyn said: “We’ve had a carbon audit done here at the farm and taking some of the results into account we had to look at how and where we can improve the way we farm. The results from the audit show that the cattle are better than average in their carbon footprint for this type of farm and the sheep are performing at about average. It makes sense that we are better than average with the cattle because in the last 5 years we’ve changed the breed and nature of the cows we keep here.”

One step ahead of the game, Glyn and Beca decided to change the type of cattle they keep on the farm. “We now keep a much smaller, more efficient cow, and have moved away from the continental breeds which weighed about 800kg to 900 kg. The smaller breeds we keep now are about 550kg to 600 kg. The ratio of weaning weight of progeny and live weight on the cow is now also much better,” he explains.

Glyn is clear that there are many other efficiency factors which contribute to the carbon footprint and emissions. “At the moment all our cows calve as heifers at 2 years old, and that’s a big help. The continental cows would calve at 2.5 to 3 years old. So we would have an extra 12 months of emissions on the farm - that’s now being addressed.

“We’re also looking at breed values from the bulls we buy in, taking into account calving ease, growth rate,and feed efficiency. For example, you could feed an animal 10 kg of concentrate and that would result in 1.5 kg of live weight gain, but there are some figures to show that it’s possible to gain 1.5kg in weight by feeding 8kg instead. If we’re looking at the emissions and carbon footprint, we consider the amount of feed that the animal gets and how long it takes for it to grow. If you can reduce the feed and the time that animal is on the farm, it’s all plus plus,” he said.

Looking at the efficiency of the livestock however is only one aspect of the work being done here to ensure the farming system keeps its carbon footprint low. Beca, who farms alongside her father, said: “We also consider how much fertilizer we’re using and have taken a new approach to our grazing system over the last 2 years and started rotational grazing. That means paddocks are separated and split into sections. The sheep and cattle go into one section for 2 to 3 days before being moved to the next one.

“The stock goes in to graze at 2600 kg of dry matter per hectare and out at 1500kg of dry matter. I go round the fields and measure the grass height with a plate meter weekly and then I know what grass I have available for the stock. When they go into a field I know exactly how many days of grazing I have there for them in that field before they move to the next section.”

Allowing the livestock only 3 days on that grass, means there is a 30 day rest period before the stock goes in there again.

“Doing it this way means we can grow more grass, with less concentrates on the farm. We found out last summer and autumn that we used minimal amounts of fertilizer and the rotational grazing system really delivers for us. It saved money but also meant less emissions here on the farm. Grass grows grass. If you can grow more grass on the farm, you use less concentrate. We also use less land for the animals, so we can produce more on less ground. That’s more economically efficient,” Beca explains.

“By doing the rotational grazing, evidence has shown, the roots of the grass get stronger and deeper. The deeper the root is, the better it opens the soil up so it naturally aerates the ground and more carbon can be stored. What you don’t want is compacted soil, because the water will run off and wash the soil away as well. Slurry is only applied on silage fields with a trailing shoe so there is no run-off. It’s more efficient because it goes straight to where it’s needed,” adds Glyn.

Beca has also started monitoring how the cattle grazing on the mountain is affecting biodiversity and is using electric fencing for rotational grazing there too. “We divided the area into four lots on the mountain and then did the rotation with the cattle. Before the cattle went in I did an analysis of the plant species and then again after the cattle moved out. There was a considerable change and we increased the variety in plant species and biodiversity. The cattle are certainly going back up again this year to keep improving that vegetation,” she said.

“We are doing a lot at the moment but we can be better. Using more grass means less concentrates and that’s a win win for the farm and the environment. Many farms are already planting trees and hedges and have done so for years. But the next step is improving efficiency in livestock farming. Genetics has a big part to play so we now look at the data of a bull and rams for example and then make a decision based on that.” 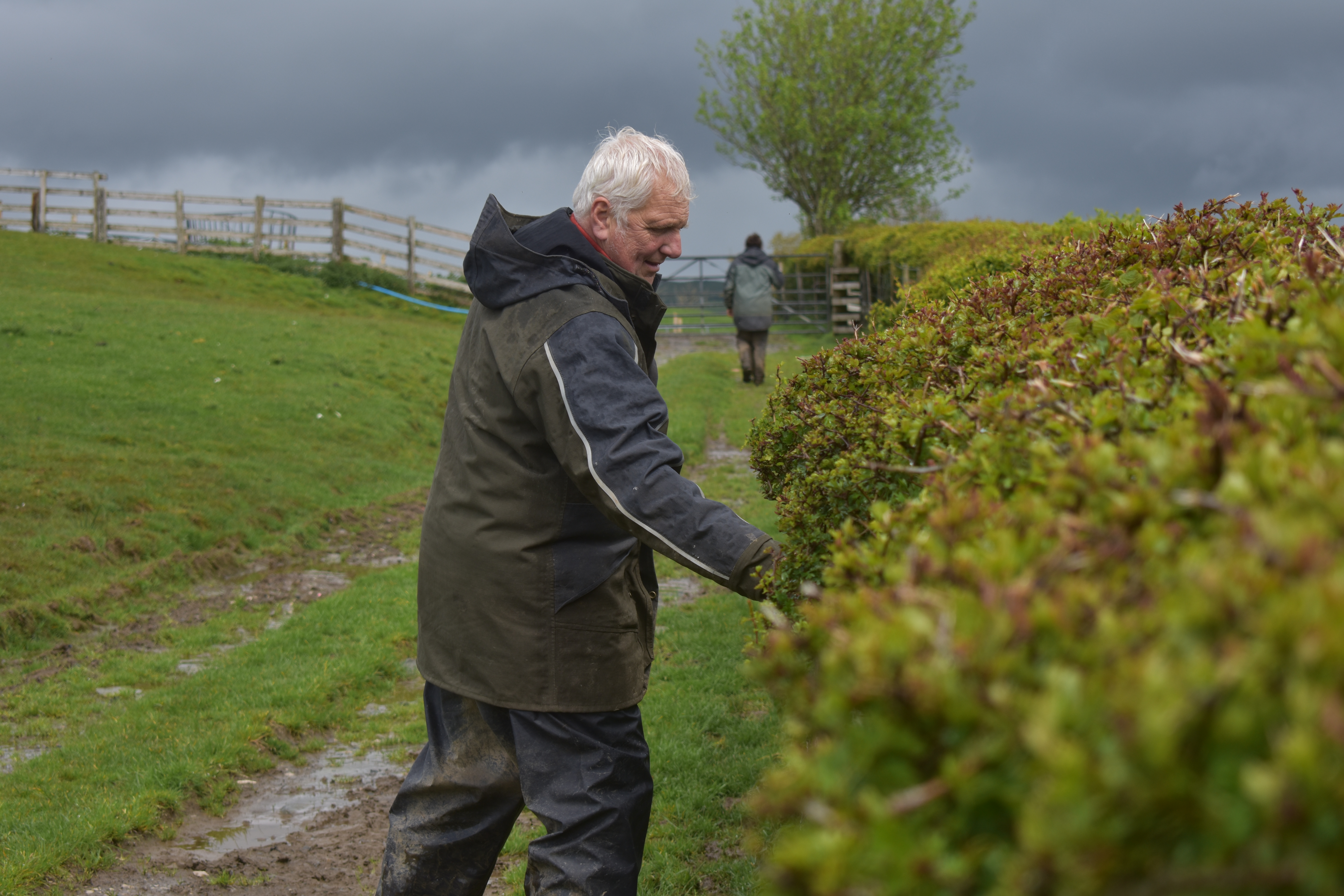 With the new grazing regime in place, Glyn and Beca soon realised that getting water to the cattle and sheep created another challenge. Glyn highlights: “With the change in our grazing regime we realised we had to pipe water from a reserve. We now have a 4,000 litre tank that brings water by gravity to the fields in tanks through a pipe. Because we’ve expanded on the water tank, we’ve been able to fence off  corridors next to the water courses so the livestock can’t get in and make the water dirty.

“Some of those corridors have now also been planted with hedges. We’ve just completed a half a mile corridor on that. It stops the animals from polluting the water and it stops soil erosion as well.”

The father and daughter team hasn’t stopped there either and further improvements to the farming system included blocking some of the ditches on the ffridd on the mountain, restricting water run-off into the Conwy river, and addressing potential soil erosion they have put in place hard standings for the livestock feeding stations in the fields. Culverts were also created to go over ditches so that the tractor doesn’t have to drive through them and dirty the water.

In the last 25 years the family have planted 4.5 miles of hedging on the farm and this year have also planted about 300 trees in patches across the farm. “They are native deciduous varieties such as oak. Choosing where to plant them was done in cooperation with the National Trust warden to make sure they are in the right places and somewhere where they would work. Planting trees randomly across the land would not work for the trees, the environment or food production,” explains Beca.

Addressing potential water pollution problems on the farm 30 years ago, Glyn worked with the National Trust and Water Agency (now NRW) to put measures in place that would see the establishment of a Willow tree water filtration system. He explains: “We had a problem with dirty water here on the yard and I wasn’t sure how to address the situation. The solution we chose was to separate the dirty water from the clean water through a natural filtration system.

“The clean water from the gutters went back into the streams and the dirty water from the yard is piped into a small pond. Under that pond we’ve planted willow trees - the principal is that the dirty water provides nutrients for the trees to grow. From the pond here is a zigzag draining system, next to which there are also willow trees to extract the nutrients and other particles from the water. Once the water has gone down to the bottom of the plantation, it gets pumped back up into the pond to go through the plantation twice.

“This solution works extremely well. The willow gets cut every 7 years, and some of them are being used as bedding for the cattle after chipping and the others are used as firewood here in the house. We’re also experimenting with the willows to see if we can stop erosion in the Conwy river by adding a bank of willow cuttings in the natural bends of the river.” 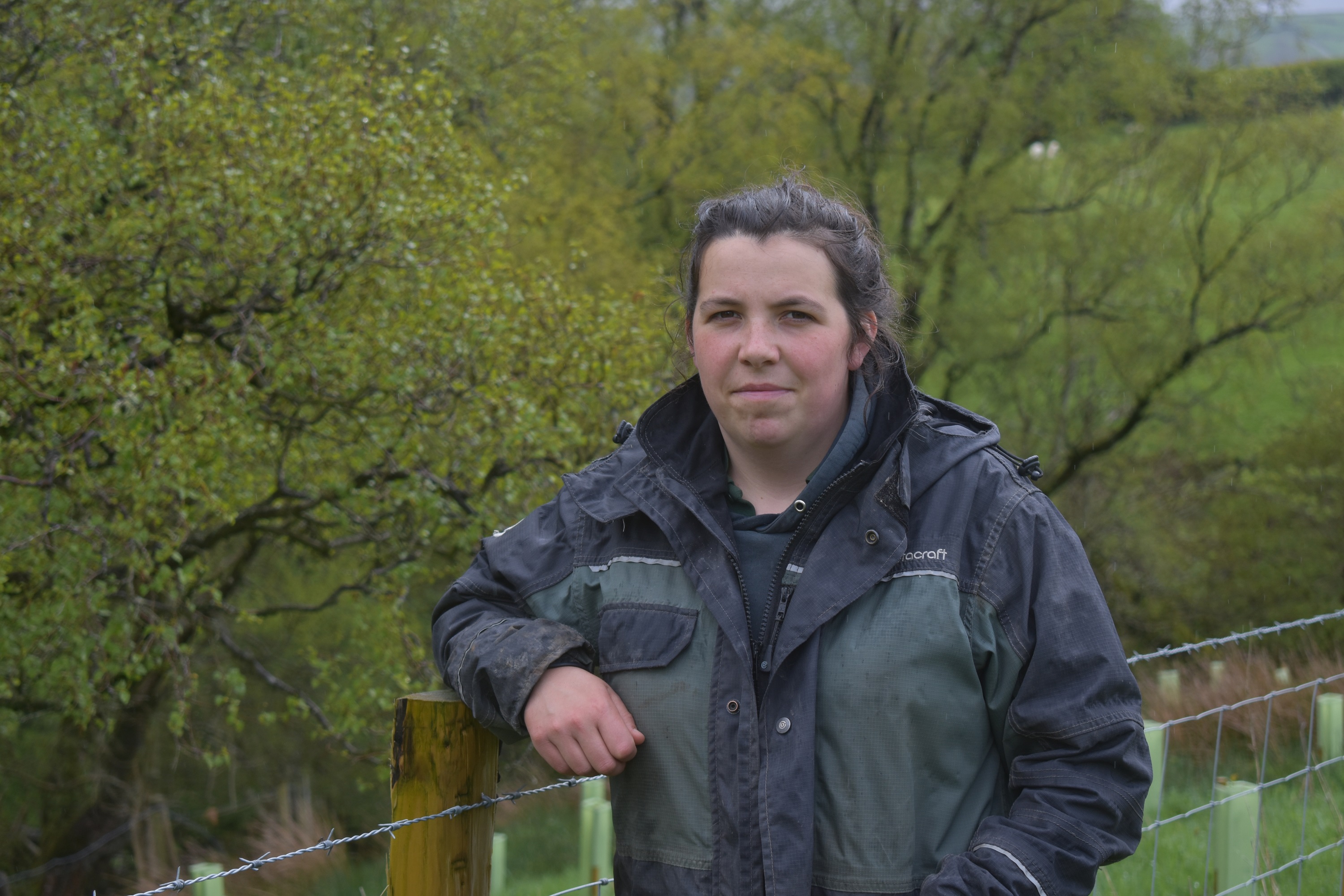 “In years to come we’d like to put solar panels on the sheds. Electric cars, pickups and tractors will come in the end - so if we can produce our own electricity in a renewable manner and be eco friendly, that will be beneficial for the farm and the environment. Why move to electric cars if that power is dirty power. It has to be renewable. Overall, we’re quite clear - everything should work and fit together like a jigsaw. You can’t have a piece of that puzzle missing.

“As farmers we are not a threat to global warming. We are the answer. Let us work together with the government,stakeholders and the public to reach mutual aims of reducing global warming for a better, cleaner and healthier future,” said Beca.