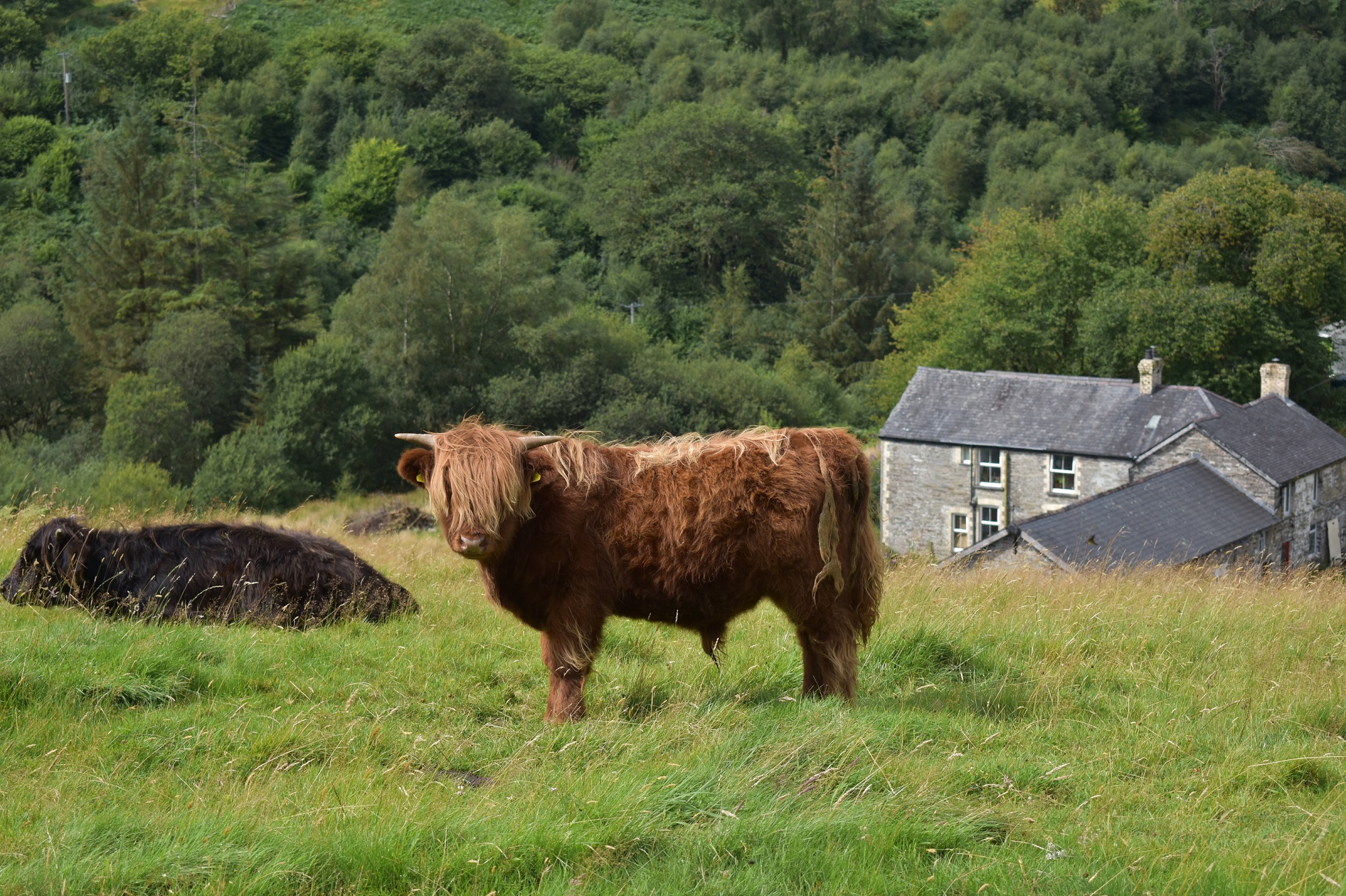 Four miles south of Machynlleth, nestled in the Dyfi valley and on the edges of the Cambrian mountains is Cefn Coch Farm, home to Dr Joseph Hope. The farm lies at about 200 to 250 meters above sea level and the land rises to the south and you can walk to the summit of Pumlumon without seeing a road or a house.

The farm has 40 acres of species-rich pasture and woodland, and Joe is currently buying another 50 acres at Ynyslas. A new entrant, he keeps a small growing herd of Highland cattle, currently just 12 head in total. 4 saddleback x wild boar pigs are also busy clearing bracken and brambles in order to rehabilitate it for grazing.

Joe moved to Cefn Coch just over 6 years ago, leaving behind a life in Edinburgh, and a career at the Royal Botanic Gardens Edinburgh where he worked as a lichenologist. He initially let out the fields to a neighbour for grazing sheep and cattle and it was only 3 years ago that he bought his first cattle – 3 cows and calves. It was a big shift but got him hooked into pursuing a farming life.

“I guess I just wanted to get my hands dirty! Working at the Botanic Gardens was a real privilege but very cerebral. I wanted to do rather than just observe. I inherited money from the sale of my grandmother’s farm in Australia and didn’t just want to pile it into stocks and shares. I have a long interest in conservation and the countryside and came here to look after what seemed to me to be a very special patch of land. In time I decided that the best way to do that was by continuing to farm sensitively,” explained Joe.

With an appreciation of biodiversity, nature and the role livestock plays in maintaining healthy ecosystems, Joe explored the countryside around him, drawing on his expertise as an ecologist. He found a landscape rich in wildlife; the woodland down the valley being one of the best for lichens in the county.

“Lichens are a very important part of the biodiversity of the western fringe of Britain. They’re little known stars of our ecosystems. The mosses, liverworts and lichens are elements of our biodiversity for which Wales is probably most special. The woodland on the farm is less ancient than that downstream so we don’t have quite so many of the rare old forest lichens, but we’ve got a healthy assemblage of species here,” said Joe. 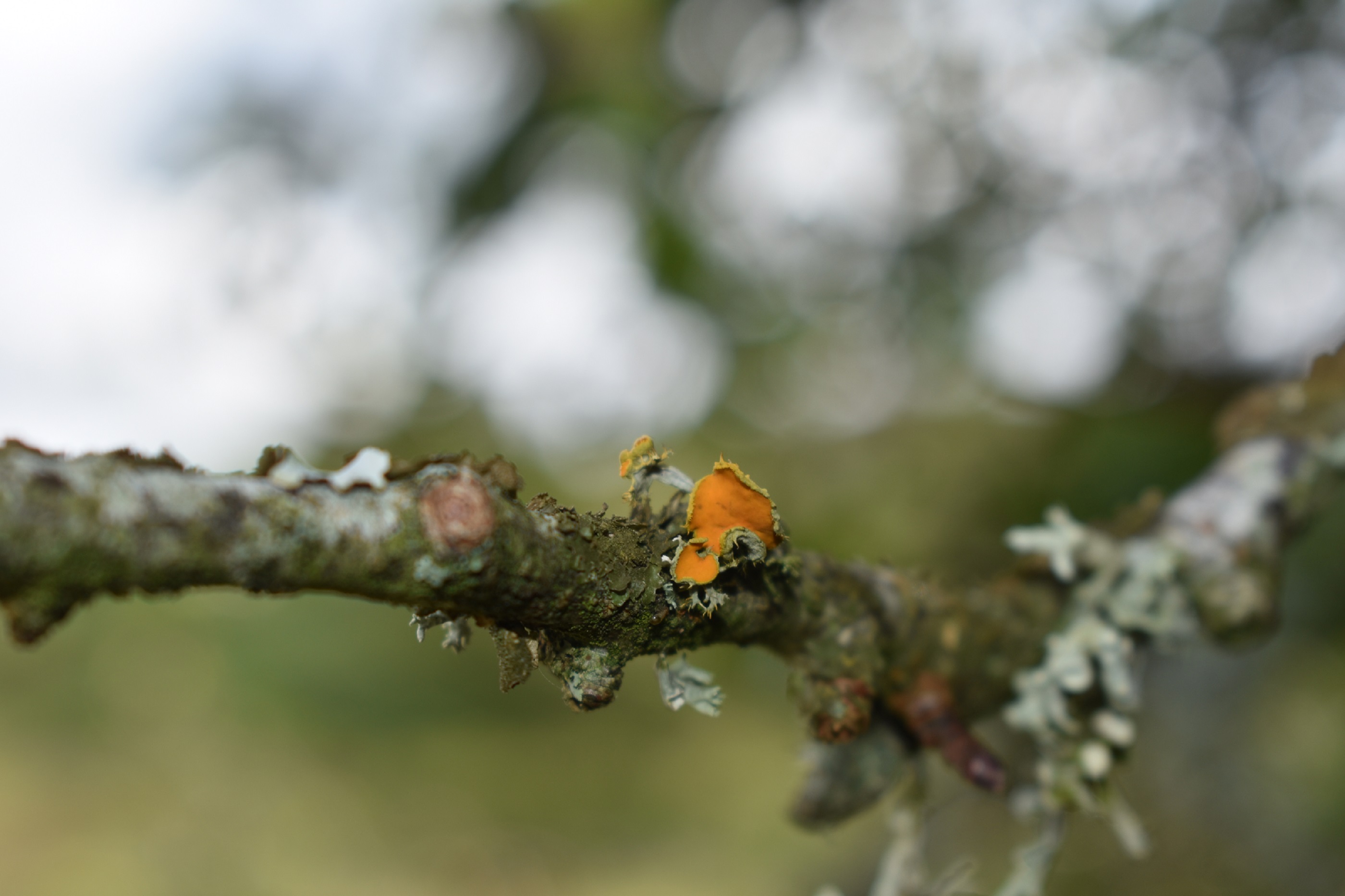 “We have one real special rarity: a piece of golden eye lichen (Teloschistes chrysophthalmus) growing on a crab apple tree. It is the only known specimen in the whole of the northern half of Wales and also the most northern example in mainland Britain,” he added.

Joe says that when we talk about ‘biodiversity’, most might picture otters, ospreys and orchids. The big, showy or cute species – especially birds and mammals – get the most attention. “That’s understandable because these species are wonderful and inspirational. But many of the lichens and mosses that grow here aren’t found in such abundance anywhere else in the world. These are species for which Wales has an international responsibility, including keeping the ecosystems that support them healthy.”

“It’s crucial that we keep these globally rare species in good condition. They have taken millions of years to evolve, to fill the exact niche that they do. But they also perform key functions in their ecosystems in terms of moisture retention, nutrient cycling, and providing habitat for other species. For example, the cyanolichens are even fixing nitrogen from the atmosphere and contributing to the fertility of that ecosystem,” said Joe.

One of the most valuable things about biodiversity, Joe added, is that it’s an incredible source of complexity. “Each of these species has its own complex biology and we barely understand how they contribute to ecosystems or how they might be able to help us in the future. Lichens in particular produce a huge range of biological compounds that are often completely unique. Many of them have been shown to have potential medical applications. It’s a treasure trove of unknown possibilities and I try to farm in such a way that protects them,” he explains.

The key to keeping all things working in harmony is sustainability, Joe said: “Sustainability, as a concept, refers to practices you can be doing in perpetuity without negatively affecting the ability of future generations to similarly sustain themselves. That means looking at all of the impacts of what you’re doing and how they contribute at a global level.

“A practice might appear sustainable on short to medium timescales if it’s physically capable of being repeated. But if, for instance, it uses a lot of fossil fuels, then we might question how truly sustainable it really is, because there’s a finite amount of fossil fuels left in the ground and burning them contributes to climate change. We have to move away from unsustainable practices – in all industries, not just farming – or our hand will be forced anyway by catastrophic climate change. The challenge though is making environmentally sustainable farming financially sustainable as well. Farming has to support livelihoods or it’s very immediately non-viable. We need the government to play it’s part in this, because current food prices just don’t reflect the costs of sustainable production.” 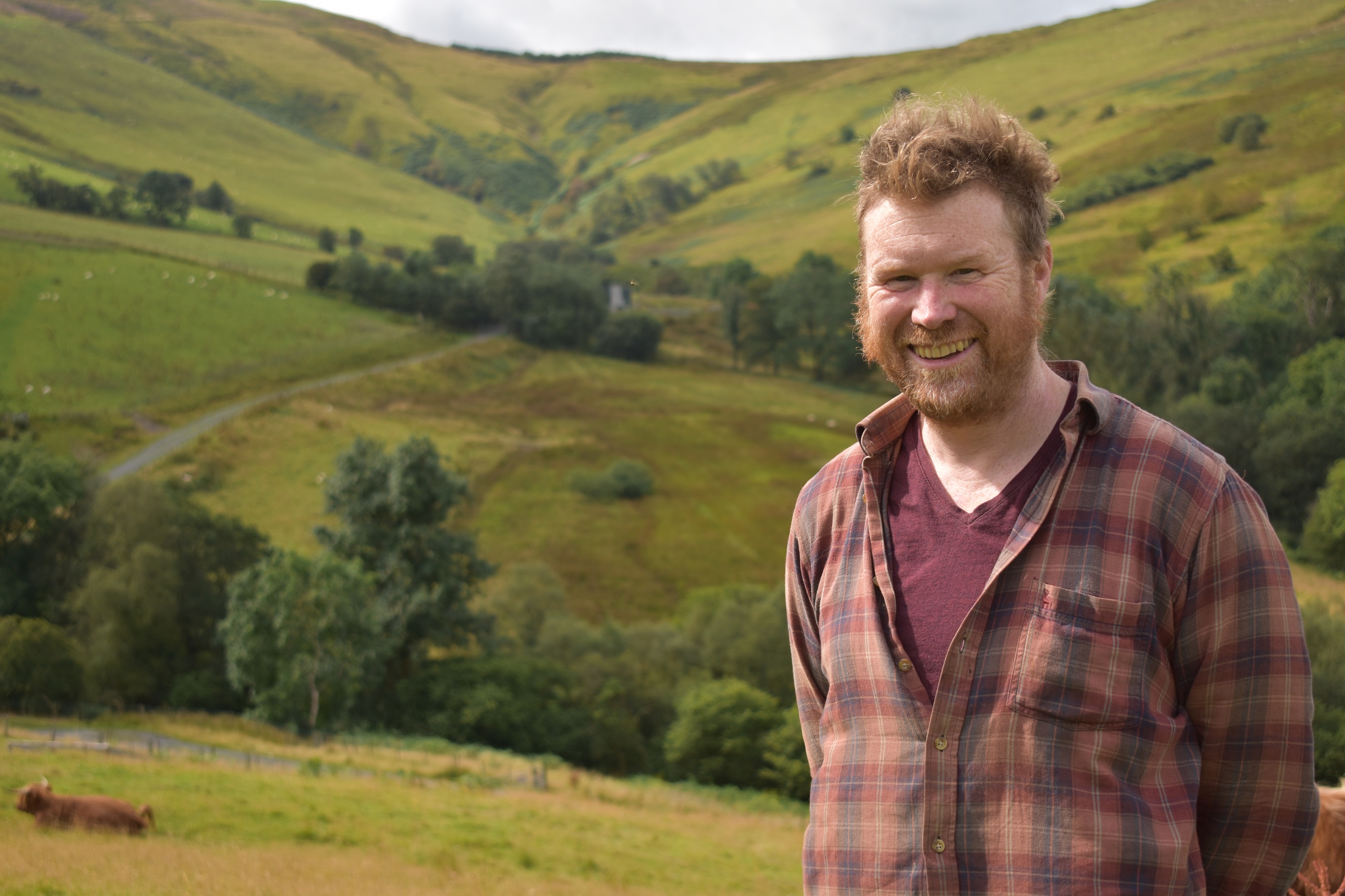 Describing his farming system Joe says it is a low intensity model designed to let nature flourish alongside the farming. “The farm was already a bit of a wildlife haven when I arrived, with lots of field trees and grown out hedges. I’m capitalising on this, and trying to enhance that character by intentionally moving towards a designed agroforestry system. Different areas of the farm will have different styles of silvopasture – for instance my large field, Cae Mawr, is being divided by hedges into 8 or so smaller paddocks, which can be rotationally grazed.

“The hedges will be species rich, with those closer to the house composed of trees and shrubs that provide edible fruit and nuts such as raspberries, blackcurrants, and hazelnuts, as well as less familiar species such as jostaberry and cornelian cherry. Moving up the slope the focus will be on native species such as thorn and holly, but skewed a little towards those that are palatable to livestock. I’m keen that the animals get the benefit of the foliage from the hedges as part of their diet, so I’m adding things like small-leaved lime and wych elm that are currently not so abundant this far up the valley. We’re also going to plant some individually protected apple trees, to produce cider on the farm in years to come.”

The Highland Cattle breed was chosen for a number of reasons. “As someone new to farming it’s great that they’re relatively low maintenance. They happily stay out all winter and eat the grass as it comes – they do well enough on the rough stuff, so I’m not pushed towards applying fertilisers, which would decrease the conservation value of the grassland.

“In fact, Highlanders are one of the preferred breeds for conservation grazing, so they’re working for biodiversity. As well as that, they’re good calvers and they have a quiet temperament. They’re very beautiful too – everybody loves them!”

Joe cares deeply about the welfare of the animals and recognizes the important role small local abattoirs play in the process. “I have a small number of cows so I know them all individually. I think about how they will be affected by all the decisions made on the farm. One big loss has been the closure of Wil Lloyd’s as a local abattoir and butcher. It was incredibly valuable to me because he was just 4 miles away and had a reputation for being good with the animals. I make sure that these animals have a good life and it’s important to me that they have a good death too.”

Despite initially coming from a conservation angle, production of high-quality food is also a key objective for Joe. “Farming is coming in for a lot of stick in the media at the moment, but of course we continue to need to eat! To me, the challenges agriculture faces with sustainability are part of a much larger problem with industrialised society that we have to tackle holistically with smarter systems.

“Some people advocate an industrial route out, where we produce our food in factories and rewild our countryside, but I want to explore what can be done to integrate producing healthy food with maintaining a healthy environment. I certainly don’t have all the answers, I’m trying to learn as I go, especially from older farmers. If you look at the small farms around here, they produced food in a non-intensive way for centuries. I think this is what most people want: beautiful farms with thriving nature producing excellent food.”