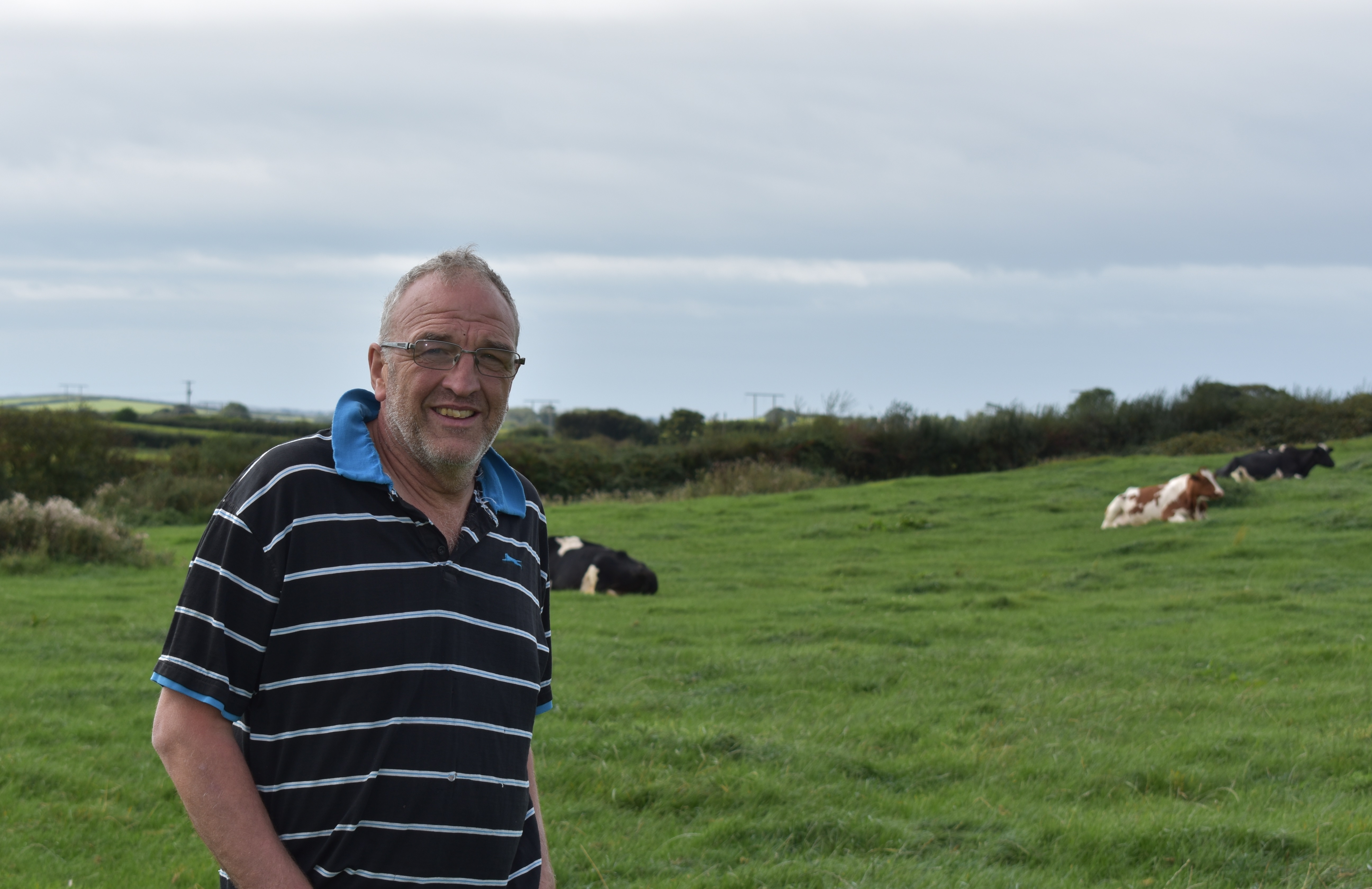 Anglesey dairy farmer William Williams, who has been farming on a county council holding for over 30 years, says that farming families are the bedrock of local communities, essential when it comes to sustainable food production and climate change mitigation.

Looking after 200 dairy cows at Clwch Dernog Bach, Llanddeusant, which includes 400 rented and 80 acres of owned land, William has always had a love for dairy farming. “I was brought up on a dairy farm and my father used to milk 6 cows. It inspired me and I started milking as soon as I could,” said William.

Starting with just 25 milking cows, William expanded the herd with the abolition of the milk quotas, but despite an increase in the numbers on his farm, he says it’s as sustainable as it can be. “I would consider our way of dairy farming very sustainable. We’ve kept this way of farming going for over 50 years. We have more cows now on the holding but it’s worth remembering that there used to be more farms around here, about 10 of them. We all had lower stocking numbers, with herds around the size of 10-20 cows. Those farms have been amalgamated into bigger units, so we have fewer farms but the same number of cows in the area, to the same acres.”

William is clear that the change in farming has had an impact on the local community. “Nobody can make a living milking 20 cows these days. We had to adapt but that has changed the community. The schools have closed as well. There used to be 4 local schools, now we have 1 big school. The smaller farms have gone, just as the smaller schools. It’s a bit sad really and just shows that farming families keep local communities alive, as well as our culture and the Welsh language,” he says.

When it comes to looking after the land, William ensures that the soil is healthy and the grass grows aplenty.The maize the family grow benefits only from cow manure with no artificial fertilizer used. “We have heavy soil here, which is great for grass growth. However it does mean that we have to keep the cows off the fields in winter to protect the soil. The cows are therefore housed over winter and are fed grass silage and maize.

“Overall the cows are essential when it comes to managing soil health and keeping the ecosystem flourishing. Their natural manure attracts insects, which help break it down, improves the ground and soil quality and feeds the ecosystem from birds to hedgehogs. We have a good balance here between grazing and housing that works for the land and our cows.”

Housing the livestock does not compromise their health and welfare, William is keen to point out. “Our cows have all the comforts they need. Good air flow, plenty of room to move about and we have 2 inch rubber mats to keep them comfy as well. We also have an automatic light system which comes on at 4 in the morning and goes off at 10 in the evening. On a dark day it also comes on during the day so the cows have the right light.

“We work closely with our vet as well to make sure they are healthy. When it comes to cows' diet over the winter, we work with a nutritionist who takes samples from the maize and grass silage and then works out the best blend for the cows. They’re as happy over the winter as they are over the summer.”

When it comes to greenhouse gasses and the effect dairy farming has on the climate, William gets frustrated that the distinction between carbon dioxide and methane is often not made. “Global averages are often used to debate agricultural emissions which is misleading. Of course, climate change is an urgent problem for all of us. There is no question in my mind that we need to reduce greenhouse gas emissions and all sectors and all countries need to play their part.What will not help in this matter is planting food producing land with trees so that we have to import more food, from countries that don’t abide by the same standards we do here in this country.”

Methane is an important climate gas, however William argues that pointing the finger at agriculture makes some very false assumptions. “Methane is not mainly produced by animal farming, the data generally places livestock agriculture at around a quarter of emissions. Also, Carbon dioxide takes centuries to degrade in the atmosphere. Burning fossil fuels adds to the stock of the gas. Methane however is a flow gas which degrades quickly and, if in proper balance, is part of a naturally-occurring cycle. So you can’t just throw the two together like that.”

The contribution of UK livestock to GHG emissions is similar to the percentage of GHG emissions from food waste from households and businesses (5%), and much less than that from transport (27%) or our energy supply (21%). Cows and sheep in the UK also only account for 5.7% of NET UL emissions and that figure is constantly reducing.

Farming in Wales, Williams says can’t be blamed for climate change. “Here on the farm for example we produce more milk with less cows now so we are already working towards our net zero goals. Our cows produce more milk now and the herd averages, which used to be 5 or 6 thousand litres per cow per year 30 years ago, have gone up to about 9 thousand litres per cow per year. Many inroads have been made over the years to improve genetics, feed efficiencies, and production systems and I think farmers are part of the solution to tackling climate change, not the problem.”

The family take their responsibility to look after the environment seriously and have worked with their milk buyer Glanbia on a carbon audit to see where they can improve what they are doing.

“We have done a carbon audit here on the farm and are now waiting for the result from Glanbia. What does strike me as problematic though is that there doesn’t seem to be a standard way of auditing a carbon footprint. We need a standard way of measuring this and I hope that the UK and Welsh Government can find a way of helping us do that,” says William.

“Planting trees everywhere is not the full answer when it comes to increasing our carbon storage and dealing with climate change. Yes we have patches of land we can use and we will, and most farms have marginal lands which can be used for that, but selling off farms left, right and centre to use the productive land, food producing land, for tree planting just doesn’t make sense. It will not achieve the desired long-term outcomes and puts food production at risk. What’s even more disturbing is that we now have big business from outside Wales coming in, buying up farmland to plant it with trees to off-set their own carbon emissions without changing their practises to be more environmentally friendly.”

Milk and dairy products, Williams says, must remain in the food chain, for food security and nutritional reasons. “We don’t want to find ourselves in a situation in years to come when there are no more dairy farmers. The implications this would have on our food security doesn’t bear thinking about. And we must also consider that campaigns that demonise one food group, be it milk and dairy or meat, make little sense. All it does is let the biggest industrial carbon emitters off the hook.

“If anything, consumers should be encouraged to make more informed choices about how and where their food is produced. And dairy has a really great story to tell. As a sector we are making progress in terms of the environment and at the same time we’re feeding an ever growing population. The dairy sector is really important in terms of food security, especially if we consider that over 6 billion people around the world currently consume our products and our ingredients.

“Dairy farmers in Wales, the UK and across the world, are part of the sustainable solution and we can be part of future sustainable food systems.”