A few miles outside  Rhayader, in Mid-Wales, nestled between the Elan valley and the river Wye, is Nannerth Fawr farm, home to Andre and Alison Gallagher. The farm house is one field from the 2 mile river frontage and the land stretches from the river to the common hill land. It’s diverse ground and the 200 acre farm includes 103 acres of grassland, including wetland areas, 62 acres of wood pasture, and 30 acres of woodland, in 9 separate enclosures. The couple currently farm 200 sheep, keep a few horses and poultry, as well as Boer goats for meat.

Andre and Alison bought the farm over 30 years ago, by sealed tender. With no previous experience in farming the couple embarked on a steep learning curve. Alison recalls: “The farm was in a derelict state when it was bought. We didn’t know we were going to be successful until the day we took it over and it was a bit of a shock as lambing started the following day here on the farm. We were plunged straight into outdoor lambing but managed reasonably well I think. It helped a lot having friends and neighbours for farming advice and support.”

As well as improving the farm and renovating the farm buildings and house, the couple have worked to maintain diverse habitats and support biodiversity on the farm. When they bought the farm a lot of woodland already existed, which they fenced off, as well as creating further woodland over the years. The existing ancient woodlands, with mainly oaks, were therefore protected and in 2013 the couple planted another hectare of native species on a small plot of land.

In 2014 they planted a further 3.5 hectares of native species and enclosed some existing oak woodland which together made 10 hectares. “We left little glades and pathways so the woodland is not too dense.  Altogether that’s 10,000 trees. We’ve also done a lot of hedge restoration,” says Alison.

“Currently we are embarking on a scheme of 11 hectares of mixed conifer and deciduous planting on the far north of the farm. It’s very steep there with a lot of bracken cover on the hill. It’s very difficult for livestock to manage so it makes sense to establish woodland there. We also wanted to make the farm more sustainable for the next generation. We felt we had to do something to generate some future income as well as the conservation aspect,” adds Andre.

Sustainability of the farm is important to Andre and Alison and looking after the land plays a big part in that. Alison explains: “We have a  traditional upland farm with a history of low inputs such as chemicals and fertiliser and the farm has now been organic for 13 years.

“We had some problems with the standing flock we inherited, mainly footrot and bad teeth. We’ve improved the flock and dealt with those problems. We also remove underperforming ewes and are selective in our breeding. The sheep now look well and are healthy.” 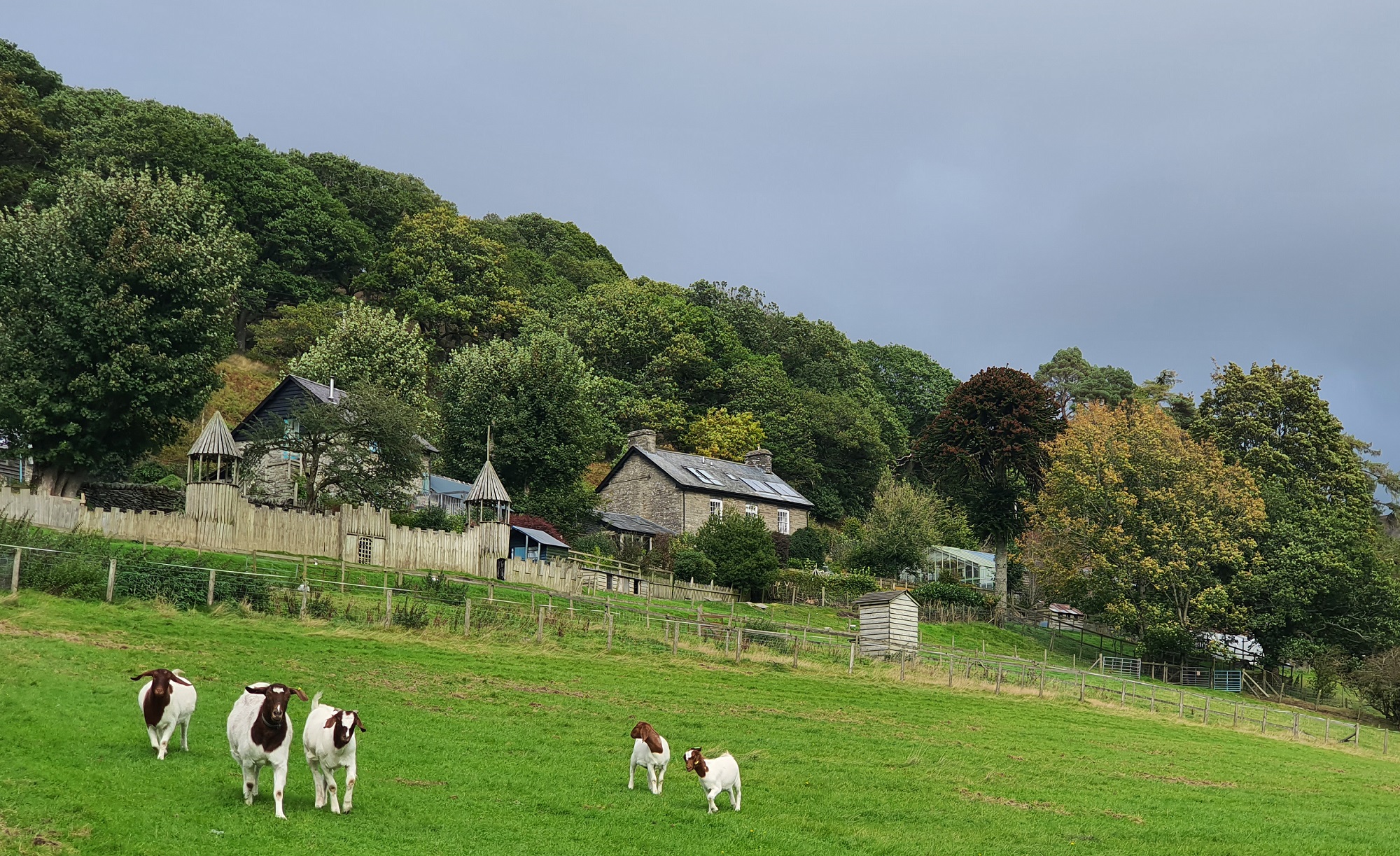 Overall the couple aim for sustainable farming practices, less cost in raising the livestock, and for the system to be low input. “We’ve cut down the sheep numbers to about a quarter of what they were before and they seem to be doing much better. The ewes are bigger, they’re fatter, the lambs are doing better as well. There is now lots of grass for them and we’re moving them around more. We make our own hay on the ancient hay meadows and just winter feed hay and a little concentrate, plus minerals, particularly for ewes expecting and feeding twins,” explains Andre.

When it comes to looking after the grassland on the farm, Andre is proud of the ancient meadows here at Nannerth. “We are really pleased to have maintained  our ancient meadows. Having previously been in an ESA scheme and then in Tir Gofal, we’re now in Glastir Advanced, so we don’t cut those hay meadows until the middle of July. We don’t graze them for a month after and we don’t use bought in fertiliser. We only use ground limestone if needed,” he says.

A survey carried out on the meadows many years ago showed that there are over 60 species of plants growing there. Whilst the crop is light, Andre says the grass is as good as it gets. “The sheep and goats far prefer it to anything else. We had to buy in a few bales last year just to top up the feed and the goats were not interested in the ryegrass. They are very spoiled now.”

“NRW are coming back soon to do another survey, including the mosses and some very rare lichens which grow in the woods and I’m really interested to see what they find.  Apparently   we’re in a micro climate here, in a bit of a dip next to the river and between the hills, it seems to have kept air pollution at bay, which is interesting because we’re fairly close to the A470,” adds Alison.

Around 66 species of bird call the land around the farm home and Andre and Alison love seeing the summer visiting birds, such as pied flycatchers and redstarts. “They nest here, raise their young and then go off again. I put up 150 bird boxes about 20 years ago and amazingly the first 50 had birds in them all within a week,” says Andre.

The Welsh Clearwing moth also thrives at Nannerth Fawr.   “It uses the mature downy birch trees close to the river. We can see where they have made holes and pupae come out. The land has been farmed extensively  for a long time and it’s nice to see such a variety of  species here,” says Alison.

Whilst the couple strongly support biodiversity and are very aware of species decline, they recognise the important role of livestock. “If the land here wasn’t grazed it would become overgrown very quickly.  In the wetlands we have established, the molinia and the rushes have spread too extensively and could take over the whole 5 hectares. We now intend to mow and graze more of the wetland and pond area.

“In the wetlands we have created 15 ponds  providing good habitat for 17 species of dragonfly, amphibians and some waterbirds.  The wetlands are grazed by 2 ponies but we need to up the grazing animals a bit. You have to have some stock grazing otherwise it turns into a wild jungle and nothing flourishes,” explains Andre.

Alison adds: “We try to do a mixture of things. Farming that sits ok with conservation, conservation that sits ok with farming. We were lucky here; we had the wetlands down the bottom with peatland, native woodlands with ancient oaks and the river margin. We’ve built on those and that has increased biodiversity on the farm.”

Keeping healthy environments in mind, Andre and Alison also keep bees. “The meadow flowers provide forage for the bees which are essential pollinators in the food chain.  Honey bees also like to feed on the local heather and we have planted small leaf lime trees which are very good for early pollinating insects.  For their comfort and ours, we built a bee house last year, which protects the hives from storms, wind and rain,” says Andre.

When it comes to food production the couple are clear that anything other than livestock would not suit the land. “We don’t have many options as to what we produce here. We’re too high up to successfully grow vegetables and other crops but what we can grow is grass. Rearing livestock is really what lends itself to our farm and grassland is a carbon sink. Our animals have a good life, we’re organic and the livestock is fed on grass. As far as the meat goes, it’s as healthy and as sustainable as it can be,” says Alison.

"As strong advocates of good quality food, we avoid heavily processed foods and meat. It is good to hear that increasingly people are making sustainable choices in the food they buy and their diets. In our opinion it’s better to have good quality local meat two or three times a week than processed, poor quality meat every day. Livestock farming, how we do it here in Wales, is fairly sustainable and I would encourage consumers who are concerned to look for Welsh and homegrown produce,” Andre says. 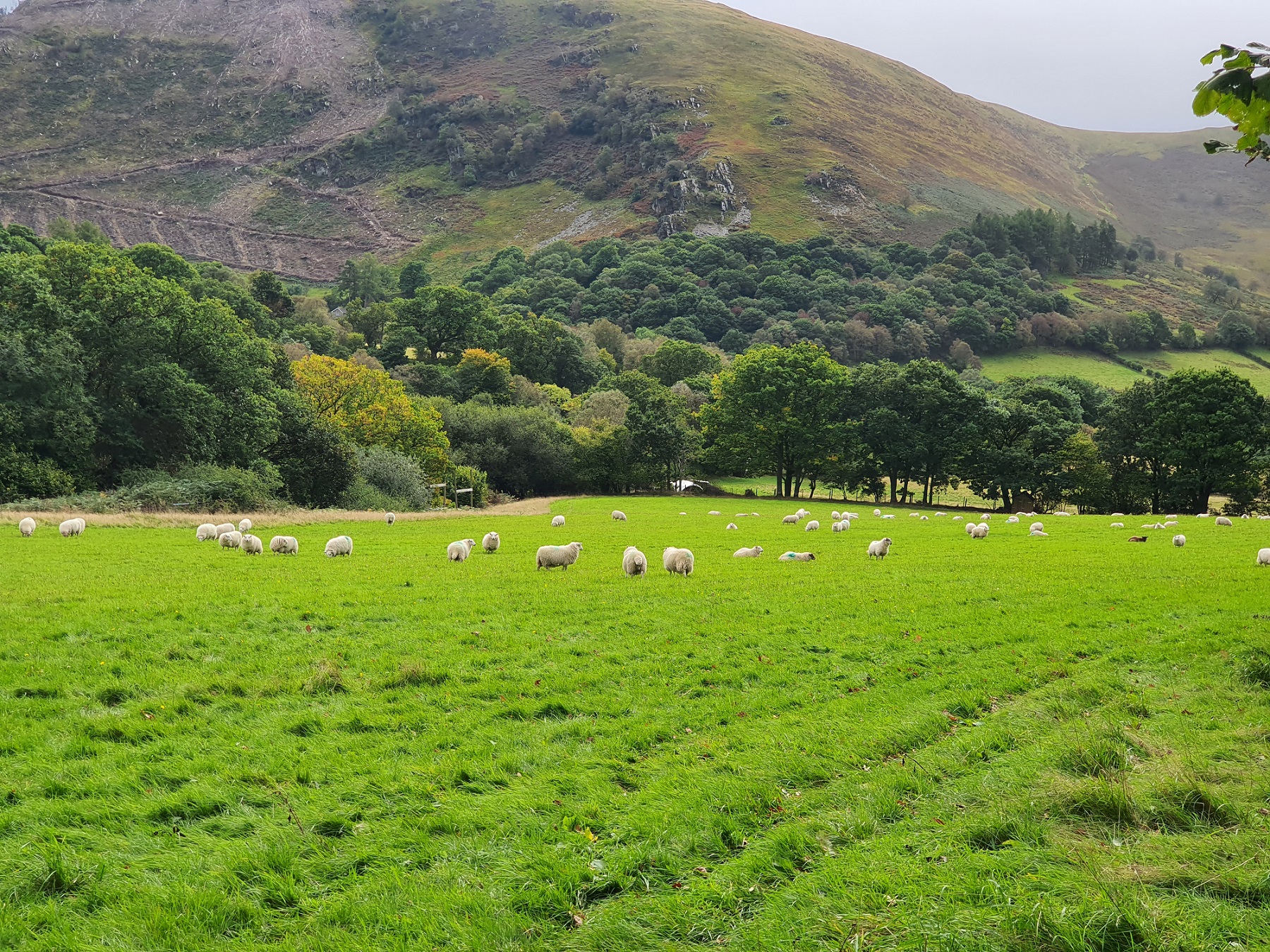 With constant advice for farmers to diversify to survive and drawing on previous experience of running a hotel Andre and Alison diversified into self-catering holiday cottages starting almost 30 years ago. “Farming is very hard and especially for smaller farms like ours. Most have to diversify to keep things going. Very few farms around here survive just on farming income. With the changes to the support system and potential trade deals with countries that have different standards, there won’t be a level playing field. So we continue to invest in our diversified farm tourism business, trying to improve something every year,” explains Alison.

“When we came here it was obvious that this is an ideal location for people to come on holiday. Farming really goes with tourism. People don’t see farm animals any more and they only think of farming as what they see on television, including mass, intensive cattle farms with no grass at all. Our guests get a real feel for what an upland Welsh farm is like,” says Andre.

With tourists from far and wide coming to stay at Nannerth, Andre and Alison enjoy the opportunity to show people what farming in Mid Wales is about. “Most people who come here really like the animals and are interested in how farming in this area works. They want an authentic farm and we’re more than happy to help our guests better understand what farming, conservation and food production here is about,” he adds.

“Farming is hard work and a lot of thought and effort goes into what you do for the future. If you worked out what your income was it would be near enough two and sixpence an hour in old money. People love what we do here and they’re always amazed at the different skills you have to have and the fact that you're out every day irrespective of the weather.

“People also like to help with lambing and many have had a great time helping over the years – I think 27 years of lambing is the record for one family. The kids get involved  and they’re fascinated with the birth, bonding and suckling process.  They learn by seeing and doing – it’s hands on!

“Keeping tourism going, looking after the land, promoting biodiversity and producing sustainable, nutritious food is what being sustainable means to us,” says Alison.

“There is also a wider responsibility because it is of critical importance to help reverse climate change and species decline in order to sustain the planet we all depend on. Working for the future and for the next generation is what farmers have always done. It’s now more crucial than ever,” adds Andre.