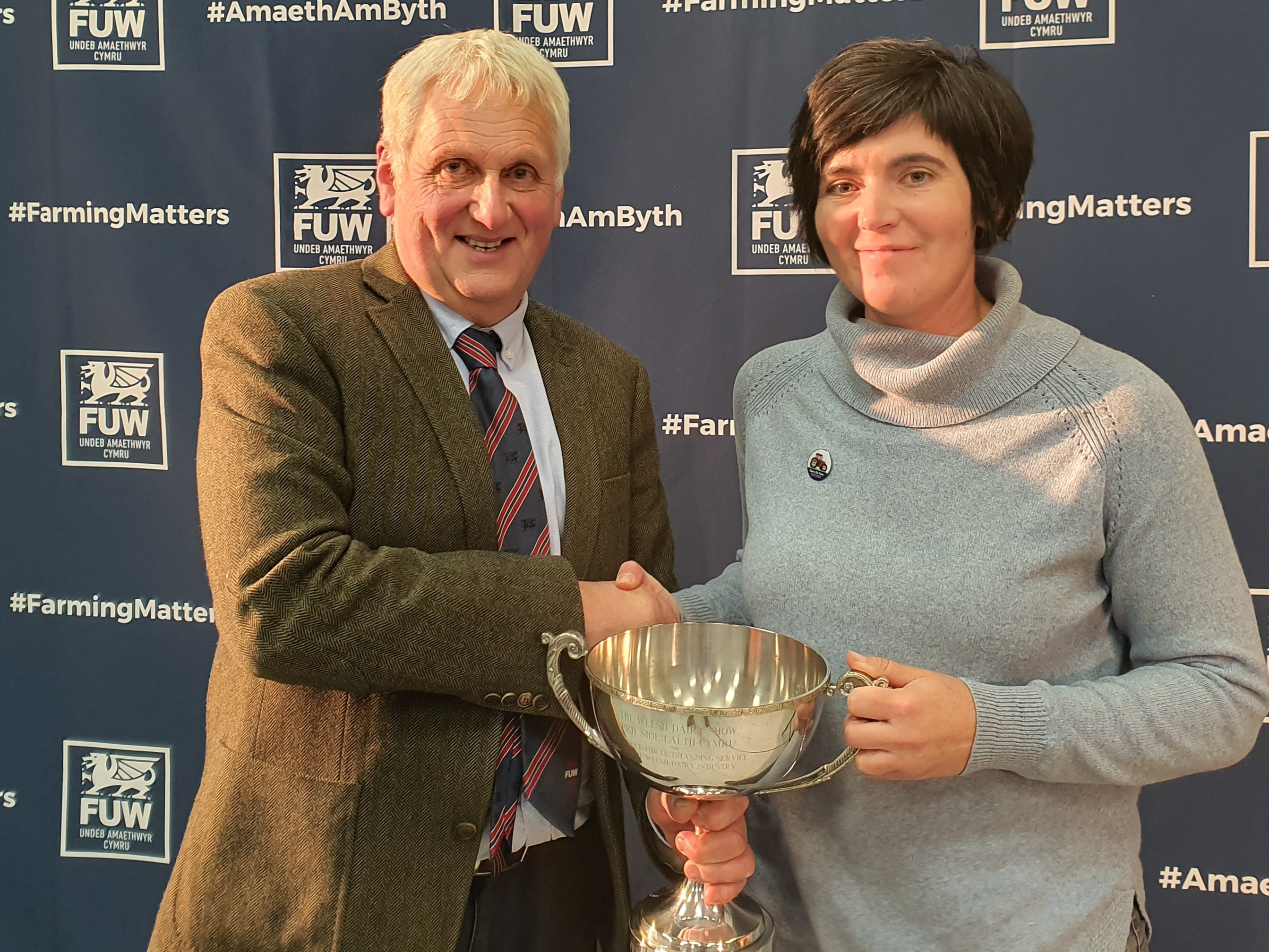 This year, the Union is proud to honour Vale of Glamorgan dairy farmer Abi Reader with the ‘Outstanding Service to the Welsh Dairy Industry’ Award.

Farming alongside her father and Uncle, Abi is a partner in the family business in the Vale of Glamorgan. The farm is a mixed holding with the main enterprise being the dairy herd.

Abi has the primary responsibility for the dairy herd operation. Her confidence in the dairy sector has been reinforced by the recent installation of a new dairy unit, which comprises of a new milking parlour, cattle handling system, and a viewing gallery to host school children to see the workings of a Welsh dairy farm.

But her involvement goes beyond the farm gate and began during the DairySOS campaign in 2012. Her passion and drive for the industry shone through as she featured on various media broadcasts, explaining the plight dairy farmers faced at that time.

She is extremely keen to sell the farming story to children and the wider general public and is always keen to welcome school children onto the farm in order to promote the work farmers do in terms of producing high-quality food whilst caring for and enhancing the environment.

Abi is a prominent committee member of the Livestock section of the Vale of Glamorgan County Show. Building on the success of her Open Farm Sunday experience, not only does she exhibit her own cows (TB restrictions allowing) at the Show, she has also taken the opportunity to give a ‘live’ milking demonstration throughout the day to show-goers.

She thrives from telling the farming story and through her involvement with Open Farm Sunday, was approached by a fellow local farmer’s son, to take up the challenge of teaching children in an inner-city school, the farm to fork story.

Never one to turn down a challenge, Abi spearheaded a team of 15 local Glamorgan farmers and took the campaign to 300 school children at Pakeman Primary School, Holloway, London. The trip became known as #CowsOnTour and the entire school became embraced in the farming day.

Under her direction Cows On Tour has gone from strength to strength. This year’s activities culminated in a week-long tour of schools around Wales. Prior to that and to raise the profile, Abi along with her colleagues took a full-size model of a dairy cow around Wales.

The Cow went to Dan Yr Ogof Show Caves, was carried up Snowdon and taken down the Zip wire in Blaenau Ffestiniog. Alongside educating many hundreds of schoolchildren the activities of Cows on Tour in 2019 raised £2500 for RABI and the mental health charity, DPJ Foundation.

Abi’s grasp of social media allows her to promote the link between farming, nutrition and animal health and welfare. Not forgetting the environmental contribution farmers make to society. Abi over the years has dealt with issues head-on – from water quality issues where TV presenters have attacked the dairy industry – to TB - she has done social media videos to get farming portrayed positively. She is not afraid to tackle bad publicity and she does so in a measured, managed, coherent manner.

Currently the NFU Cymru Dairy Board Vice-Chair, Abi has previously been a member of the NFU England and Wales Board and at the age of 32, she was the youngest person to take on the role of Glamorgan NFU Cymru County Chairman. She is also Chair of the Cattle Health Certification Standards (CHeCS) and a member of the Wales Animal Health and Welfare Framework Group.

Presenting the award, FUW President Glyn Roberts said: “Through this award, we recognise those who have made a great contribution towards the development of the dairy industry and those who have become an integral part of the dairy industry in Wales. Abi epitomises what can only be described as a stalwart of this industry and I congratulate her wholeheartedly on her achievements. Abi’s dedication and commitment is an inspiration and I wish her all the very best for the future.”