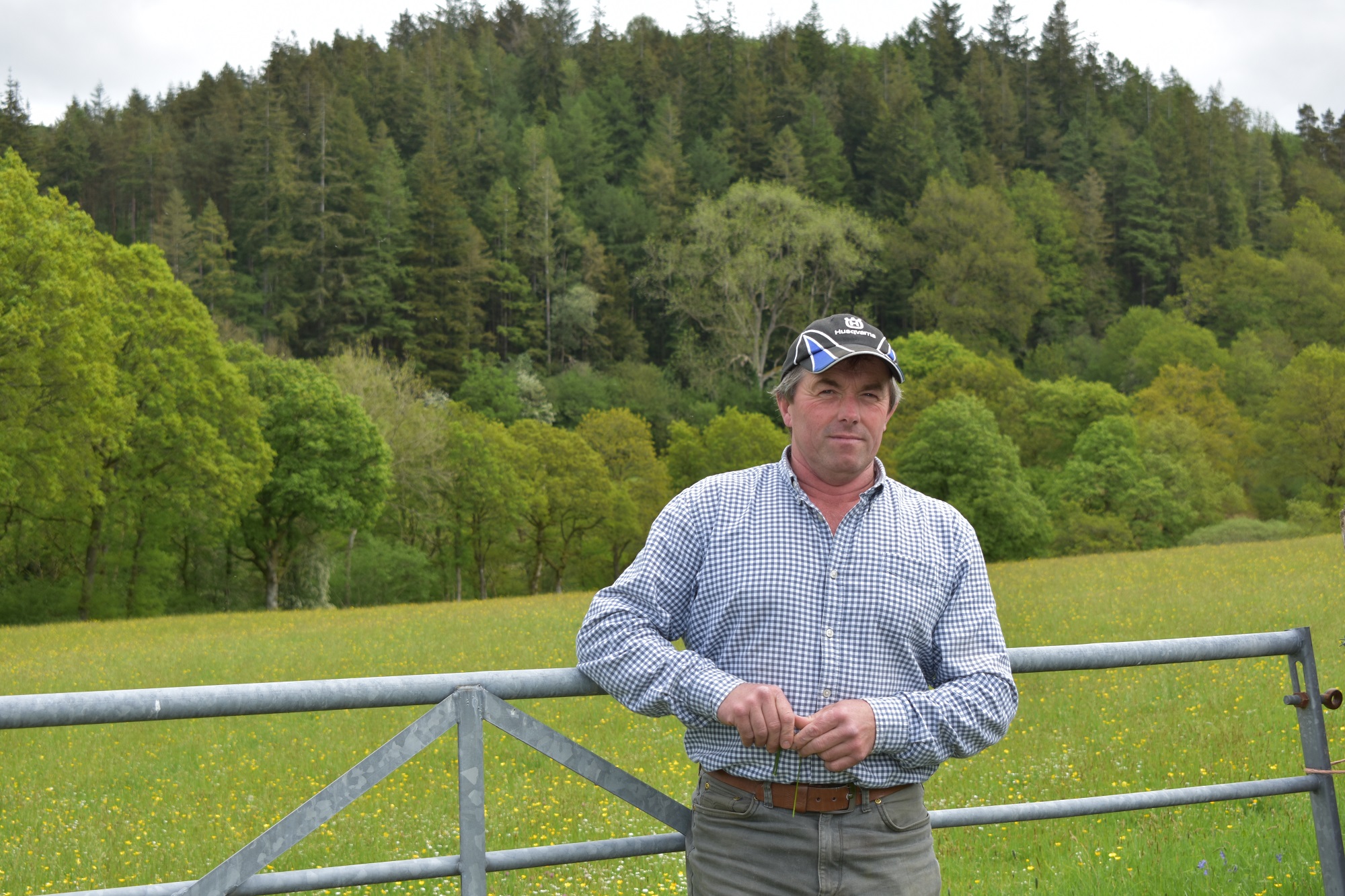 Nature, conservation and food production must and can go hand in hand, according to Montgomeryshire beef and sheep farmer Carwyn Jones. He farms at Ty Mawr, Dolanog in the Vyrnwy valley about 14 miles from Welshpool and 6 miles from lake Vyrnwy. The 160 acre beef and sheep farm has been in the family for many generations, with Carwyn taking over full management of the holding from his uncle in 2002.

Describing the land he says: “Most of the land here is pretty steep. There isn’t much soil, about 2 inches of soil and 2 miles of rock. So I have to manage that carefully. We have a lot of woodland surrounding the farm and I also look after about 30 acres of our own woodland on the farm. There is such a great variety of bird species and wildlife around and I firmly believe that’s because of how this land is managed.”

A champion hedgelayer, Carwyn has established over a mile of hedgerows alongside the farm on each side of the track and has recently planted over 600 new hedging plants. “All in all I look after about 4 miles of hedges on the farm land. I’ve always been a fan of hedges and trees. For me, I do what I do in terms of nature and conservation work for the love of doing it. I’m mad about hedges and the benefits it brings to the land and wildlife.”

However, Carwyn is clear that livestock can’t be excluded from the conversation. “The livestock and the land work well together. I keep Welsh ewes, and I don’t cross them with anything. And I keep Hereford cross cattle. It’s not a highly productive farm, I’m not farming it to its full potential - it’s low input as they say. As it is now, the Welsh sheep suit it very well and the cattle too. I wouldn’t want too many continental breeds. I cross them with a Charolais bull but you want pretty hardy cows up here. The livestock play an intrinsic part when it comes to biodiversity,” explains Carwyn.

Walking across the fields, taking in the diversity in flora and fauna, he says: “ The big word is rewilding, which sounds good on paper. But if we took all the livestock away from here, I don’t want to imagine what this landscape would look like. You wouldn’t be able to see the woods for the trees. People say farmers are destroying our beautiful landscape but why are they calling it beautiful? It’s beautiful because of the way it’s being looked after right now. It’s farmers who guard the land and there is a life cycle to it all. We work with nature.

“The land that we’re on now needs a mixture of sheep and cattle on it. If we only kept sheep here we wouldn’t get the same biodiversity. You’ve got to have manure on fields. I have the common on one side, uplands on another side and some lowland, as well as the river. We have our own unique habitat here on the farm and I want to improve it further.

“I think I’m probably one of the biggest conservationists in the area. My grandad and uncle were the same. They too were against spraying and fertilizing the ground, pushing the land too much. Their ethos of looking after the land has rubbed off on me. 1989 was the last time any fertilizer has been applied to the ground here. The farm is as natural as you can get it. I’m probably more organic here than some of the certified farms.”

The grazing style on the farm hasn’t changed much since Carwyn’s grandfather farmed the land but the stocking levels have been reduced to ensure that sheep and nature flourish. “The first thing I did when taking over was cut down the sheep numbers by about a third. There were too many and without fertilizing there just would not have been the grass for them. Now we have more flowers and where the cattle are, the biodiversity has gone through the roof. The land now has more time to breathe, which gives us better flora and fauna.

“The buttercups and other flowers in the meadows are doing wonders for our pollinators too. I have excellent hay meadows because they are natural and not forced. I have kept the meadows the same since day one, I’m not part of any restrictive scheme that means well but ends up creating the opposite of what was desired in the first place,” he said.

Walking down to check the sheep who graze near the river Vyrnwy, passing summer flowering hedgerows, Carwyn adds: “What has to be understood is that every country is different and our farming systems here in Wales are not like they are in for example South America. The damage done to the environment by some of those countries is heartbreaking and it’s not what we do here in Wales.

“My livestock graze on pretty much organic ground, they are naturally fed and I keep a high health and welfare standard. That’s not what happens in other countries and consumers as well as politicians need to make that clear distinction.I'm against intensive farming, but I fear we’re being pushed into it by accident. Some of these regulations out now, the small family farm won’t be able to keep up and you’ll have the big farms taking over, swallowing up us small scale farmers.”

Whilst the farm is as organic as possible, Carwyn isn’t keen on some of the agri-environment schemes on offer. “Glastir small grants is the only scheme I’ve taken part in, which is mainly hedging and boundary works. Farmers need to have more of a say in what they want to do, based on what works for the land they farm. Schemes need to be tailored to the specific farm and area, rather than a one-size fits all approach.

“We’re not in these schemes to make money. But we need to be able to say what works and what doesn’t. I have no failed hedges on the farm and they have been tested too, with the dry springs. I have planted where it works and not just at random for the sake of ticking a box on a form. You can’t just plant trees and hedges anywhere you like. I’ve created buffer zones, shelter for livestock and birds with the extra hedges I’ve planted and they work really well.

“It has to be worth it for the farmers to participate in agri-environment schemes. It’s usually the small scale farmers, like myself, that are open to these schemes but we don’t get the financial rewards for it like we should. It’s got nothing to do with money grabbing, but a better reward would encourage more people to participate whilst producing sustainable, nutritious food,” he said.

Addressing claims of pollution as he looks across the river that passes through the farm, Carwyn said: “I can’t see how the way I farm is any more polluting than if there was no farm here and you only had wild animals roaming about. I have no slurry as the livestock are kept outside and there are only 15 cows here anyway. The farm and the river Vyrnwy which runs through the land here has been surveyed and the report has come back to say it’s very clean with no pollution and aquatic life flourishing. It’s quite frustrating when the whole industry gets tarnished like that and we’re all required to spend money on things that won’t make a difference to the majority of holdings.” 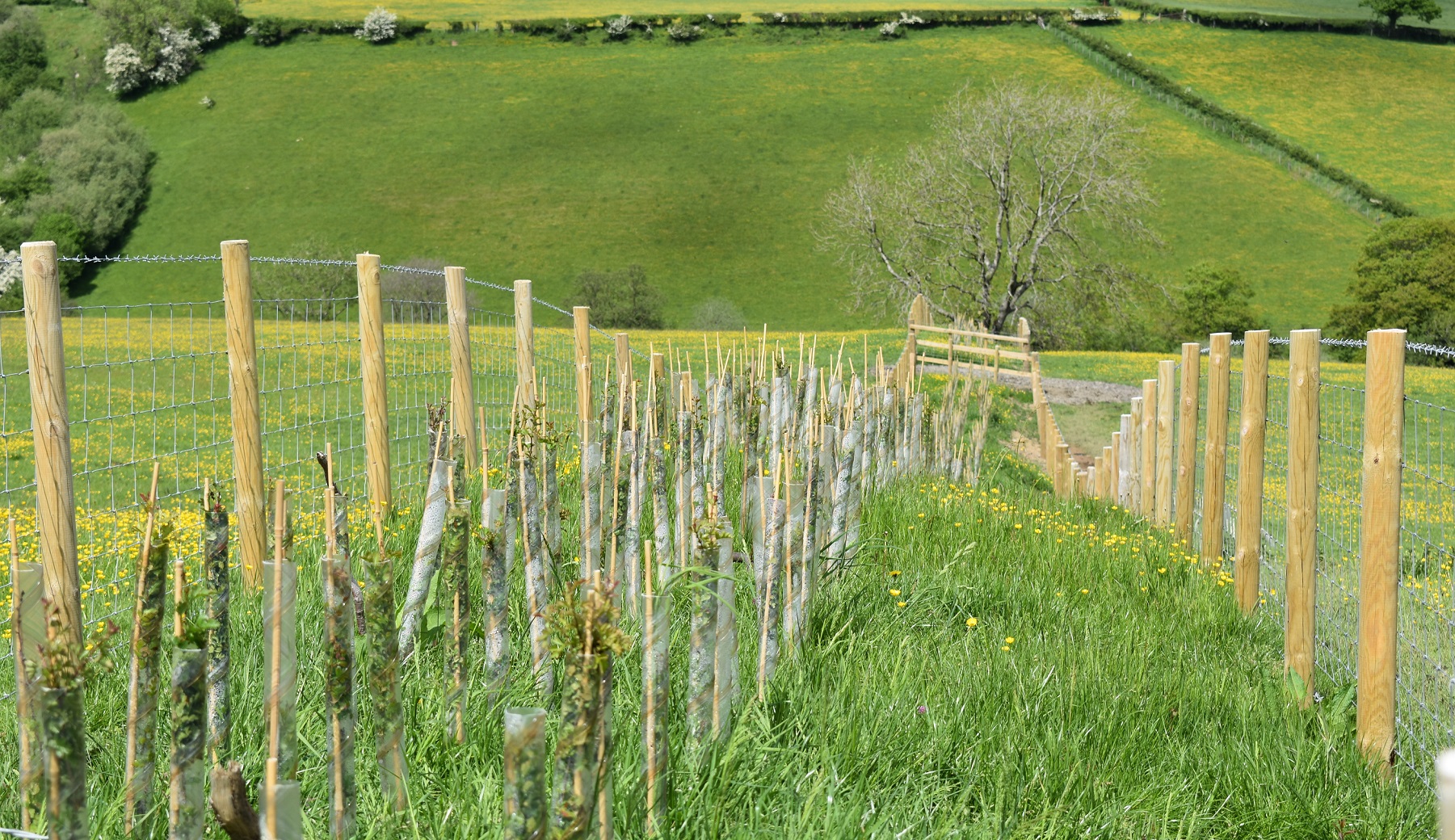 As he carries on his walk around the farm, checking the newly planted hedges and cattle, he says: “We have every little bird you can think of here, however, some birds that were here on the common 30 years ago, like lapwings and curlews, they’ve vanished. I put that down to natural predators like badgers though. When the natural predator was controlled, there were plenty of lapwings here.

“Nothing else has changed around here. The badger population has bloomed around here in the last 20 years and now we have hardly any of these birds left. The curlews used to nest on the top field, and I’ve only heard one this year. In the 1970s, you’d hear no end of them and there would be flocks of lapwings on the common. Farming has got a role to play in some declines but certainly not around here.”

Other issues, such as bovine TB, also play heavily on Carwyn's mind and he says they pose a real threat to small family farms in Wales. “If nothing is done and all the cattle go, then we won’t be able to look after the environment the way we do it now. And cattle are the best conservationists we have. Look at the difference between a landscape grazed by a few cattle and sheep and one that’s not - you can’t miss that mixed grazing has better results. It saddens me that because of government cowardice, the species they pledge to protect are actually declining and our livelihoods and the environment are being put at risk.”

“Sadly, to a point, farming systems like ours here are under threat. I keep only a small number of cattle but I’m not sure how we can compete with farmers from other sides of the world who aren’t under the same rules and regulations. It worries me. We keep our farming system natural, with low stocking levels. You can farm and be a conservationist. It works hand in hand but we have to be given the chance to do that,” he added.